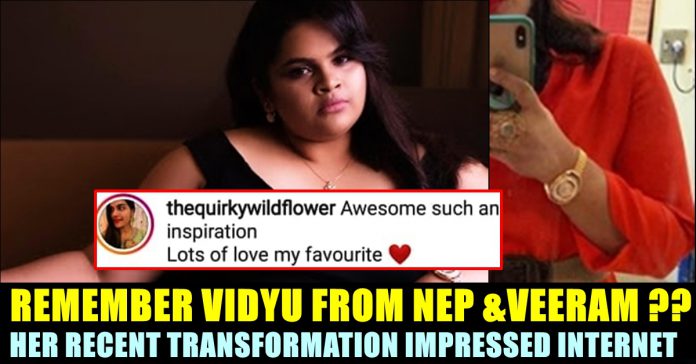 Comedy actress Vidyu raman who is known for appearing in films like Veeram, Neethane En Ponvasantham inspired her 3 lakh Instagram followers by coming up with a massive transformation. Many of her followers started inquiring the actress about her diet control and daily routine after seeing her physique. The actress reduced 18 kilograms in no time it seems.

Actors exhibiting variations in their body physique to portray different roles is common. Tamil actors such as Vikram, Surya are involved in body transformations for years. As far as female actresses are concerned, recently Keerthy Suresh’s transformation left the fans of Tamil cinema in awe as she reduced her weight vastly to appear in one of her upcoming film. Nazriya’s transformation after marriage with Fahad Fazil also surprised her fans.

Here’s the transformation of Keerthy Suresh :

Now, Vidyullekha Raman, daughter popular television actor and writer Mohan Raman, stunned the internet with her hard work. Sharing the comparison photographs of before and after, Vidyu revealed the secret on how she pulled it off.

She dubbed the two pictures she added as Fake confidence VS Actual confidence. She says that people used to constantly ask how she is so much confident with that physique. “Today I am actually confident of myself because I did the unthinkable and changed my lifestyle and habits.” Vidyu wrote in her post.

On reducing her weight, Vidyu says that putting our mind to it is the only way to make anything possible. To the people who are aspiring to reduce weight, Vidyu says that they should workout 6 times a week and should be disciplined with a controlled diet. She confirms that there is no short cuts such as pills or potion to make the result happen. “Just pure hard work” she the actress says to her followers.

“Nothing in life comes easy but when you see result, it’s worth all the sweat and tears” says Vidyu who reduced her weight to 68 kilograms as of 20th June 2020.

Fake confidence vs. ACTUAL confidence. When I was overweight a frequently asked question by everyone to me was “how are you so confident?”. In retrospect, was I? Or did I just come to terms with the fact that I will be obese all my life? Today I am actually confident of myself because I did the unthinkable and changed my lifestyle and habits. I have come to realise that if you put your mind to it, anything is possible. Sounds cliché, right? But it’s the truth!! You need to be disciplined, workout 6 times a week and follow a balanced diet. There is no secret potion or pill to make the result happen! Just pure hard work. Nothing in life comes easy but when you see result, it’s worth all the sweat and tears. Recorded weight as on 20/06/20 – 68.2kgs #weightlossjourney #weightlosstransformation

Vidyu told her followers that she was 86 kilograms while starting to work out and now she reduced 18 kilograms.

To one of a user who asked why obese women should fake her confidence, Vidyu replied to her by saying that her only intention is to stop making excuses and lead a healthier life.

Many other followers admired the hard work of the actress and expressed it through their comments :

Comment your views on this transformation of Vidyut Raman !!