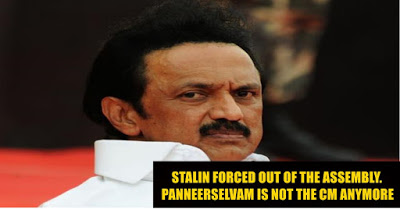 Before you start reading this, we’d advice you to stay indoors or get back home soon. Continuous protests are happening all over the state. Although the one in Marina is quite pacifistic, the ones in the other parts of the state are not. Read to know more.

The gathering today first had all DMK members walk from war memorial to the Fort St. George complex. It later went on to escalate to both Congress and DMK walking out of the complex after their request for a secret poll was turned down by the speaker. He commended them that they couldn’t take part in his decision and it was final.

DMK MLA’s went on to create a ruckus which led to them occupying the center stage and suddenly escalated to a point where the speaker’s shirt was torn and he had to re schedule the parliament to a later time. When the parliament started again, he commanded the legislative security men to remove Stalin from the parliament by force. The security transported Stalin out of the parliament with force, tearing his shirt and beating him up in the process.

The DMK MLA’s were agitated by this and they left the complex to the Raj Bhavan to complaint to the Governor about the happenings of the day. Meanwhile in the assembly, the members were split into four groups and voting were taken on each side about whether the AIADMK MLA’s support Panneerselvam or Palanisamy. Palanisamy went on to gather the support of 122 MLA’s, thus becoming the Chief Minister of the State.

The DMK MLA’s have now gathered in the Marina housing a protest against the assembly happenings and not so judicial way of the voting process. Protests have erupted in other parts of the state and veteran leaders have been arrested by the police. It is expected that the event may escalate further considering the unstable government and the system at hand.