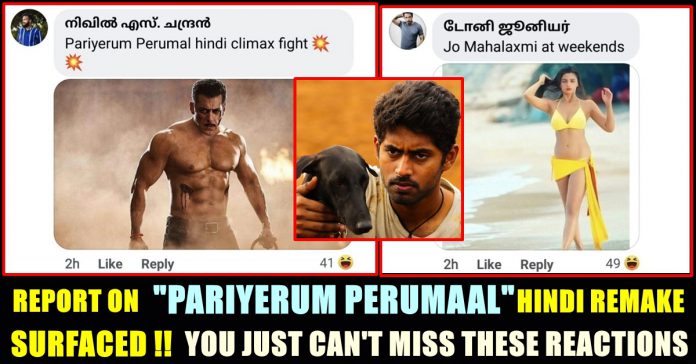 “This is the first Tamil film that Karan has acquired the rights to remake. He has remade films from other languages-English, Hindi and Marathi. Now, he is looking at remaking Pariyerum Perumaal” said a source which added that the filmmaker has also acquired the remake rights of Malayalam film “Driving License”. Karan has opted for Akshay Kumar and Emraan Hashmi for the remake of the Malyalam blockbuster.

Karan Johar ventured into remaking films since 2010 by remaking Hollywood film “Step mom” and titled it as “We are Family”. He remade films such as “Agneepath”, “Warrior” by having Hrithik Roshan and Akshay Kumar respectively. The filmmaker also acquired the remake rights of Vijay Devarakonda’s “Dear Comrade” and is planning to remake it soon.

Pariyerum Perumal had a dream run at the box office and many film personalities including 2.0 director Shankar and Rajinikanth lavished praise on the film. The film’s plot revolves around the relationship between Pariyan and Jo played by Kathir and Anandhi respectively. Due to the caste discrimination that takes place in the society, the relationship that Pariyan likes to maintain with Jo would be misunderstood by the girl’s family members. The film ends with Pariyan beating an elderly man who was hired to kill him and talks with the father of Jo on how his mindset wouldn’t let him think broader.

Now, after the announcement was made, fans of Tamil cinema has been flooding the feed of social media platforms such as Twitter and Face book with trolls and hilarious reactions. Making fun of the commercial format Bollywood filmmakers rely on, online users believed that the Pariyan of Hindi version would have six packs like Salman Khan and Jo would roam in beach side by wearing bikini attires in weekends. A user went one step ahead and trolled Bollywood filmmakers saying that the climax scene where Maari Selvaraj used two tea tumblers and a small jasmine flower, would contain two milk shakes and biscuits.

Karan Johar Remade marathi blockbuster film "Sairat" into Dhadak in Hindi. Anybody who've seen both the films already know how this pariyerum Perumal remake will be 😭😭

Karan Johar to remake Pariyerum Perumal in Hindi and this thread..

Comment your views on Karan Johar bagging the remake rights of Pariyerum Perumaal and the reactions surfaced regarding it !!