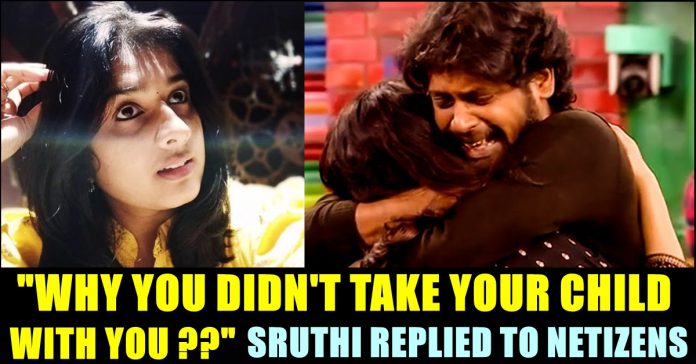 Rio’s wife entered the Bigg Boss house on the Wednesday episode as a part of the “freeze” task. After spending 80 plus days inside the Bigg Boss house, the contestants finally got a chance to meet their dear ones. Rio got extremely emotional on seeing his wife and broke down. They both hugged each other and Rio kept on apologizing to her for taking the decision of entering the house and for staying away from her for this long.

Shruthi, Rio’s wife asked him not to cry and expressed her affection towards him by saying that she started loving him more now. Further Shruthi imitated Rio and made the entire house laugh. She advised him to be like the Rio of “Freeya vidu” times. It was a show that telecasted in Sun music where Rio would interact with the viewers casually irrespective of their impulsive questions. They also saw a video together in which their friends and relatives wished Rio for the best.

When Bigg Boss asked Shruthi to leave the house due to time constrain, she refused to go off her husband. After having an emotional conversation with her husband, Shruthi left the house. On seeing the episode, Veteran actress Sri priya who is keenly following the Bigg Boss show, appreciated Shruthi by posting a tweet in her official twitter handle.

Rio’s wife is such a positive cute kid

Meanwhile a number of followers messaged Sruthi in Instagram asking why she didn’t go inside the Bigg Boss house with her child. Replying to them, Shruthi said that couldn’t take her baby with her due to COVID 19 protocol.

“HI GUYS.. A LOT OF PEOPLE MSGED ME ASHING WHYI DINT TAKE RITHI. I COULDN’T TAKE RITHI PAPA INSIDE DUE TO CORONA PROTOCOL, AS SHE IS BELOW 1 YEAR.” Sruthi’s Instagram story read.

Rio raj who started his career in media industry as an anchor, debuted as a protagonist in a Tamil film named “Nenjamundu Nermayundu Odu Raja”. The film was produced by actor Sivakarthikeyan under his own banner. As his second film “Plan Panni Pannanum” is awaiting for theatrical release, Rio entered Bigg Boss house as a contestant. The reality game show which is being hosted by “Ulaganaayagan Kamal Haasan”, had Rio and 14 other celebrities as contestants. The show is nearing its end and Rio became one of strong contender for the title. Rio Raj and Sruthi got married in the year 2017 and the three year old couple having an adorable daughter named Rithi.