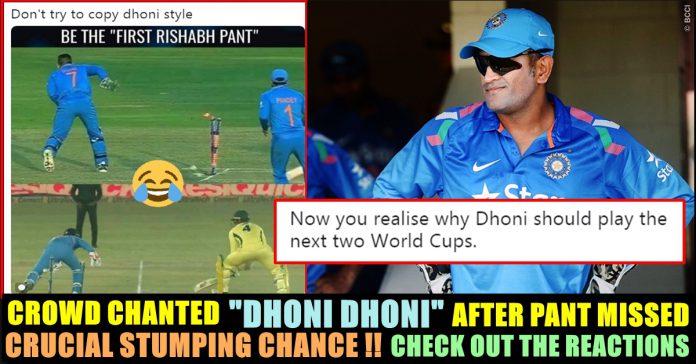 Young wicket-keeper Rishabh Pant didn’t have the best of nights during the fourth ODI against Australia in Mohali on Sunday. The Delhi cricketer missed multiple chances behind the stumps and he made matters worse when he tried to pull off a MS Dhoni style back flick to get Alex Carrey run out in the 44th over.

It all started in the in the 44th over of the Australian innings when Rishabh Pant missed a straight forward stumping chance to dismiss Ashton Turner on 38. Turner went on to play a match-winning knock of 84 from just 43 balls and help Australia level the 5-match series at 2-2. Even as the “Dhoni… Dhoni” chants were on, Pant tried to compensate for the missed stumping by attempting a flick to the stumps to run Alex Carey out in the third ball of Yuzvendra Chahal’s over. However, Pant missed the target and conceded an extra run to Australia.

@RishabPant777 is good, he is new.
But @msdhoni is best forever. #Dhoni pic.twitter.com/nsT8ziavX5

Pant also pushed captain Virat Kohli to go for a DRS review against Turner in the fourth ball of the over. The on-field decision stayed after the review process, adding more frustration to the hosts who were struggling due to the dew in the North Indian city. 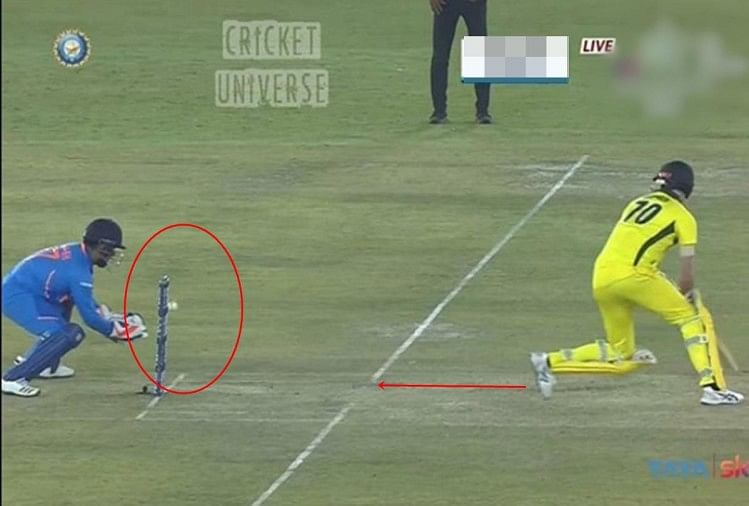 “They’re chanting ‘Dhoni’ every time he (Pant) misses a bit from behind the stumps. That’s really hard and unfair from the crowd.”

Rishabh Pant, who recenly earned a Grade A central contract with BCCI, is widely believed to be MS Dhoni’s successor. He is being tried out in the final two ODIs against Australia so the Indian team management can decide if he is good enough to make it to the World Cup squad. In Australia, Rishabh Pant was on fire behind the stumps. He was also solid with the bat and was the second highest run-scorer behind Cheteshwar Pujara in the 4-Test series which India won 2-1.

Check out the internet reactions for Pant’s missed chances here :

One of India’s most listless display with the ball and in the field in recent times. Dropping absolute sitters. Also, in times like these, India realise the value of Mahendra Singh Dhoni behind the wickets. Taking nothing away from the brilliance of Turner though #IndvAus

About Pant’s missed opportunities, I am not really worried because he won’t keep in WC. Waste of time to lose shitz over it. Hopefully he will get better before Dhoni goes.

Rishabh Pant is 16 years younger than Dhoni, and yet his reflexes are 16 times slower than Dhoni’s

Now you realise why Dhoni should play the next two World Cups.

However, things turned sour for the hosts as Ashton Turner took the Indian attack to the cleaners with some unbelievable hitting, helping Australia chase down a record-breaking target of 359 runs.

It was the highest ever total that Indian team failed to defend in its ODI history, losing the game by four wickets. 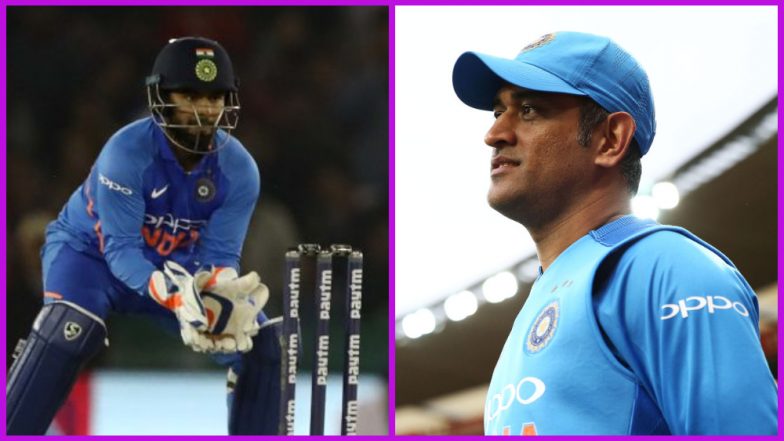 Playing only his second ODI, Turner hit an unbeaten 84 off 43 balls with five boundaries and as many as six sixes to help Australia reach the target with 13 balls to spare.

With the series level at 2-2, Feroz Shah Kotla in Delhi will play host to the decider on Wednesday.