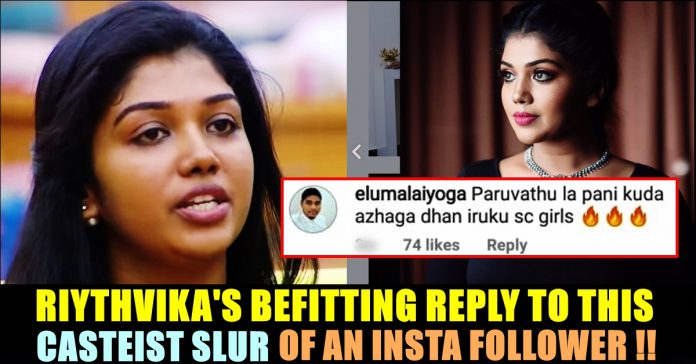 Despite of several movements and protests against the existence of caste discrimination in India, few venomous people who has strong belief in casteism are continuing to throw a shade on people without giving a thought about the consequences. Even in social media, we have seen several videos and social media handles glorifying their caste in order to prove that they are superior than other people who belong to other castes by birth. One such vicious social media user named as “Elumalai Yoga” who thought that female cinema celebrities are easy targets for his casteist slurs, made a shameful comment on actress Riythvika’s post only to taste his own medicine.

Actress Riythvika who clinched the Bigg Boss title in the year 2018, initially rose to fame through her role in Pa. Ranjith’s “Madras”. She won the hearts of Tamil TV audience with her true nature and simple yet elegant appearance. Being the only Tamil Bigg Boss contestant who never talked about her co-contestants behind their back, Riythvika involved herself in the physical tasks of the show as well. Her presence in the show impressed the Tamil audience which made her to win the trophy of the Kamal Haasan hosting show.

Since the lockdown implementation, Riythvika became super active in Instagram and started involving herself in several photoshoots to upload pictures in her Instagram profile. In one of her recent post, the actress who handled trolls in the past in style, happened to face a casteist slur.

In the series of pictures which was clicked by Rithvika herself, the actress looked beautiful with her blue tops. “#selfclicked📷 #selflove #stayhome #smile😊” read her hashtags for the post.

This post received thousands of likes and enormous number of comments from her followers. As we all know, social media is not a place where we can expect 100% of positivity. In this post of the actress, a user named as “Elimalai Yoga” mentioned a caste name and said that even pigs would look cute when it is young.

This regressive comment was backed by 74 Instagram users is the saddest part of it. However, Riythvika who thought of giving him back called him as a pimp indirectly. She wrote “saringa Mr. Baadu, sorry Mr. Maadu” in ehr reply comment.

Here’s the screenshot of her reply :

This is not the first time Riythvika is facing casteist slur from public. As soon as she won Bigg Boss show, many people wanted to know about her caste and searched for it. Replying to them, Riythvika wrote “To all those who search for Riythvika’s caste, To all those who criticizing me by saying that I won Bigg Boss title just because I belong to a particular caste, I did not belong to any caste. You find out my caste by searching in your own caste drainage”

Comment your views on these replies made by the “Kabali” actress !!