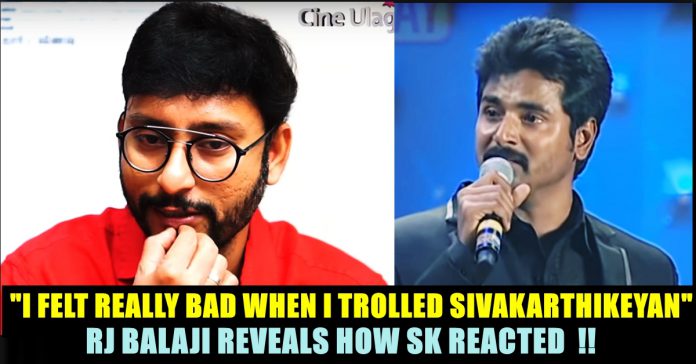 RJ Balaji, is an Indian radio jockey, presenter, comedian and actor based in Chennai, Tamilnadu. He is best known as the host of the BIG 92.7 show Take it Easy once and its now defunct segment Cross Talk, where he made prank calls to unsuspecting victims. After appearing few films as comedian RJ Balaji is now making his debut as protagonist in his L.K.G film which is hitting theatres coming 22nd.

The actor is now appearing in many Youtube channels in order to give interviews as a part of the promotional activities for his upcoming political satire film L.K.G. In a recent interview to Cine Ulagam, RJ Balaji revealed the moment when he asked apologize to actor Sivakarthikeyan.

Sivakarthikeyan, while receiving award in Vijay awards for the category “Best Entertainer”, he cried on stage. In the memory of his late father, the actor who could not hold his tears would shed them and say that he misses his father at the moment.

RJ Balaji while talking about the moment where he felt bad about himself for trolling someone beyond the limit. He mentioned the moment where he imitated Sivakarthikeyan’s Vijay Awards moment in a show which telecasted in Zee Tamil channel. “Only after doing the show I came to realise that I did something that is not healthy. I asked the channel authorities not to telecast the particular portion but they did not listened. I felt very bad while the show went on air.” he mentioned.

“Once I met Siva, I asked him apologize on the first place. But he has not asked me anything about it. Since then we are very good friends to an extent we both support each other’s works” he added. Yesterday RJ Balaji and actor Vishnu Vishal involved in a big time quarrel where Vishnu criticized Rj balaji’s LKG film for getting early morning shows. Balaji for his part hit back at Vishnu Vishal by asking him to take care of his health. Later both of them came to compromise as per a tweet by RJ Balaji.

RJ Balaji’s LKG also interpreted as Lalgudi Karuppiah Gandhi is a political satire film directed by Prabhu on his directorial debut. The film stars RJ Balaji and Priya Anand in the main lead roles while Nanjil Sampath has also landed an important role in the film. The film is produced by Ishari K. Ganesh under his production banner Vels Film International. Leon James has been roped into score music for the film while Pa Vijay and popular fimmaker Vignesh Shivan are roped into pen lyrics for the songs.