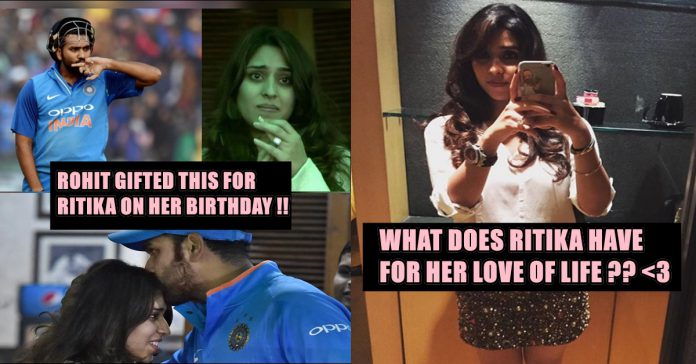 In the second ODI at IS Bindra- PCA Stadium in Mohali, Rohit Sharma, smashed a double century! In just 153 balls he scored a not-out 208 runs! His terrific batting helped the Indian team reach a whomping target of 392!

Now, the best part about this roller-coaster ride with bat and ball is that this is Rohit’s third double hundred in ODI! But what made this celebration even more special and better than the best is that it was Rohit’s 2nd marriage anniversary.

To get this magnanimous gift on their second marriage anniversary from Rohit would have made Ritika so much happy and brimming with emotions. This is the best gift Rohit could have given her wife. The couple are never shy in showing their love for each other on the social sites, often sharing pictures with lovely captions which always win the heart of everyone, and makes them one of the most adored couples in the cricketing world. She is seen cheering Rohit in the ongoing season of the Indian Premier (IPL) 2018, where his team Mumbai Indians (MI) have managed to win only 2 matches so far. On Monday, Ritika went on the social media to posts an adorable picture of her cricketer husband with a puppy, as well as, share a heartfelt message for him on the special occasion.

Her post reads, “Happiest birthday to my favorite person in the world @rohitsharma45 to seeing the northern lights, paddle boarding with whales and traveling the world together.”

Happiest birthday to my favourite person in the world @rohitsharma45 ❤to seeing the northern lights, paddle boarding with whales and travelling the world together ❤❤❤