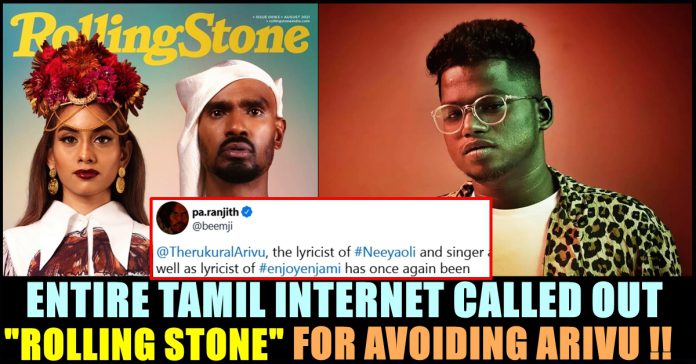 August 2021 cover of Rolling Stone Magazine which promotes the Independent music videos “Enjoy Enjaami” and “Neeye Oli” became a subject to controversy after the authorities of the magazine decided not to use the picture of Arivu, the lyricist who wrote lyrics for both the songs. Along with director Pa. Ranjith, many people who became aware of the magazine’s cover has been calling out “Rolling Stone” through their tweets and reactions.

Arivu who rose to fame among Internet audience through his presence in “Enjoy Enjaami” and anti-caste lyrics, didn’t get featured in the magazine’s cover. He penned lyrics for “Enjoy Enjaami” and worked with Shan on writing the lyrics “Neeye Oli”. The entire cover story consisted a small quote of “Arivu” with no space for him in the cover image.

Condemning the gesture, Pa. Ranjith, in his tweet asked “Arivu, the lyricist of #Neeyaoli and singer as well as lyricist of #enjoyenjami has once again been invisiblised. @RollingStoneIN and @joinmaajja is it so difficult to understand that the lyrics of both songs challenges this erasure of public acknowledgement?” to express his displeasure over the cover image.

Director C.S Amudhan of “Tamizh Padam 1” and “Tamizh Padam 2” uploaded a tweet writing “If the Arivu erasure wasn’t a deliberate & blatant move, Dhee, Santhosh Narayanan and A.R Rahman should speak up, otherwise it will go down as a historical injustice. These are people we believe are on the right side of the good fight, I really hope they do the right thing”

If the @TherukuralArivu erasure wasn’t a deliberate & blatant move, Dhee, @Music_Santhosh & @arrahman should speak up, otherwise it will go down as a historical injustice.These are people we believe are on the right side of the good fight,I really hope they do the right thing.

Check out some of the other reactions that emerged in Twitter :

Erasing what now? Idk how many times ppl will have to point this out. Shouldn't Arivu be on the cover too? Enjoy Enjami is his song, his politics, his history. https://t.co/ZZSyG90R8T

I don't think anyone can neglect or ignore arivu anymore !!

The appropriation of Arivu started right from that very first poster of enjoy enjaami. Remember that.

It should have been Arivu instead of Dhee. Or atleast him too. This is why the UCs appropriating the struggles and triumphs of DBA community should be called out. What is this blanket South Asian card that these people are playing by invalidating the actual person behind it? https://t.co/c494sB3cX7

This. And if you haven't listened to The Casteless Collective's album 'Therukural' you're missing out. It is amazing! The songs in it are not only bangers but also have incredible lyrics. Arivu is a gift to Tamil pop culture. https://t.co/YGtvbb9KtX

And we are back erasing Arivu's contributions in Enjaai Enjaami I see? Isn't this history in a nutshell? Utterly disgusted at all those concerned, more so at Dhee and [email protected]@. (They could have and should have raised their voices FOR Arivu).

After the outrage, the official twitter account of Rolling stone came up with a post including the picture of Arivu, mentioning him as “Firebrand Tamil rapper, lyricist and composer”.

(2) Firebrand Tamil rapper, lyricist and composer @TherukuralArivu who packed a punch in tracks like "Enjoy Enjaami" and "Neeye Oli" pic.twitter.com/1Aqd3JObJi