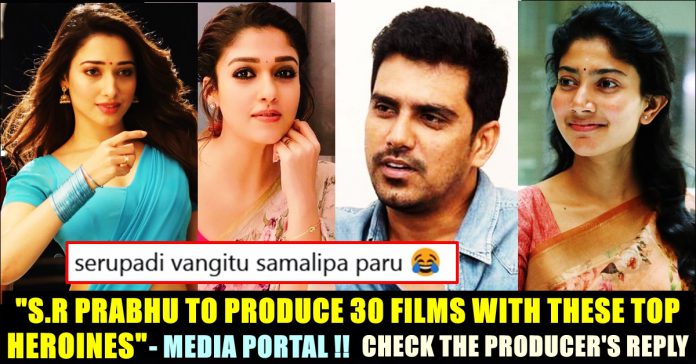 Happening producer S.R Prabhu reacted to a baseless rumour which said that he is going to produce 30 plus films in near future by having Tamanna, Nayanthara, Sai Pallavi, Shraddha Srinath in the lead roles. The producer, without losing his nerves, said that his production house Dream Warriors Pictures have accumulated some scripts in the lockdown and expressed his exclamation over any production house planning to make 30 films in advance. The film producer also hoped it to become reality someday.

S.R Prabhu who is known for producing quality films such as “Aruvi”, ”Joker” is a relative of the veteran actor Sivakumar which naturally makes him as a cousin of actors Suriya and Karthi. His most recentg production “Sulthan” became a commercial hit among the fans of Tamil cinema. Prabhu is one of the very few Tamil film producers who is pretty much interactive with his followers in Twitter and had grabbed headlines for his fitting replies to his haters in the micro blogging social media site.

On Friday, Prabhu came across a tweet of a Twitter page named Cinemapatti. The tweet said that the film maker is planning to produce 30 films and the casting of those films include high profile actresses such as Tamanna, Nayanthara, Sai Pallavi and Shraddha. The online portal also said that seven of those 30 films are female centric ones.

“30 movies are being planned to produce for OTT by @prabhu_sr ,in that 7 films are women centric films. Nayanthara, Sai Pallavi, Shraddha Srinath Tamanna to rope for it” read the tweet of Cinemapatti.

Immediately reacting to the tweet, the young producer wrote “We have some scripts accumulated in the lockdown. But 30 is quite a number for any production house. Hope someday this becomes a reality” in his reply tweet and Cinema patti replied back with a “Good Luck”.

We have some scripts accumulated in the lockdown. But 30 is quite a number for any production house. Hope someday this becomes a reality ✌🏼😁 https://t.co/C4rmIKrEPS

Check out some of the reactions for the conversation that took place between Prabhu and the media portal :

On the work front, S.R Prabhu’s “Vattam” of Sibi and Andrea and “Taanakaran” of Vikram Prabhu is currently under various stages of production. Comment your views on this reply from the film producer !!