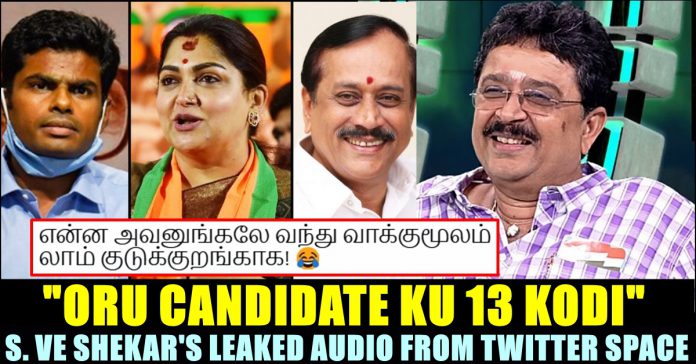 After 2001 elections, in which BJP allied with DMK and won four seats, the party had own four seats again in 2021 elections, this time allying with AIADMK. The party didn’t win any seat in the elections of 2006, 11 and 16. The party became eligible to enter the legislative Assembly for the first time in 20 years, after winning four seats in the state.

Now, to our shock, S.Ve Shekar, while having a conversation with his party members, confessed that he heard about each candidate of party were given Rs. 13 crore and asked whether they showed data for the money spent. According to this statement of him, it has been said that a total amount of Rs. 260 crore could have been circulated illegally in the Tamil nadu assembly election 2021 on behalf of BJP party.

Listen to the audio below :

The audio that is doing rounds in social media platforms has caused various kind of reactions among the users of it. “One of my friends said that he bought Rs. 2000 per vote in Coimbatore-south constituency. So there is a huge chance of black money circulation” a social media user said. Check out some of the reactions below :