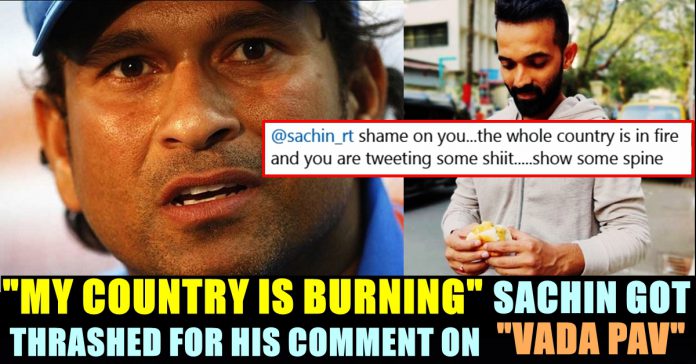 Not a surprise that Sachin Tendulkar is one of the most followed icon in social media. Having more than 3 crore followers in Twitter, the cricketer is very much active in the micro blogging social media site. Now one of his reply to his former colleague Ajinkya Rahane has received wide attention.

Ajinkya Rahane posted a picture of himself eating “Vada Pav” and asked his followers on how do they like their Vada Pav. His tweet read “How do you like your vada pav? 😋

Sachin Tendulkar replied to this tweet by answering to his question. The legendary cricketer wrote “I like my Vada Pav with red chutney, very little green chutney & some imli chutney to make the combination even better👍”

I like my Vada Pav with red chutney, very little green chutney & some imli chutney to make the combination even better👍

This reply from the cricketer received many reactions from the users of Twitter. Most of them replied to this tweet in a way of trolling the cricketer. As JNU protest instigated celebrities such as Deepika Padukone, Anurag Kashyap to voice out, this tweet from the cricketer disappointed many of his fans and followers. “The country is in shambles, and this man is only concerned about his vada pav. I mean WOW!The people of India have supported you for so many years, now it’s time you speak for them in their support!”

Shameless @sachin_rt. India is burning. JNU students are attacked. Come out of your AC bungalow and enjoy the scene. https://t.co/Gwj7zxUccc

@sachin_rt shame on you…the whole country is in fire and you are tweeting some shiit…..show some spine https://t.co/E0h5bL5Dgh

What a disgrace of an inspiration you are. I wish your #BharatRatna could be recalled @sachin_rt https://t.co/rP9svFkB9j

“And my nation on fire” https://t.co/gJcT1u1IAn

Please sir speak about real issues. this is the not time to speak about vada pay… https://t.co/AWD2dtPdM9

Haha. What a politically loaded statement. Humble Vadapav has come to the rescue 👌😁 https://t.co/UEBMOTkwRH

Red blood is flowing in country sir. And you have great powers. And with great powers comes great responsibilities.

On 10 October 2013 Tendulkar announced that he would retire from all cricket after the two-Test series against West Indies in November. At his request, the BCCI arranged that the two matches be played at Kolkata and Mumbai so that the farewell would happen at his home ground. What do you think on these reactions received by the Master Blaster ?? Comment your views below !!