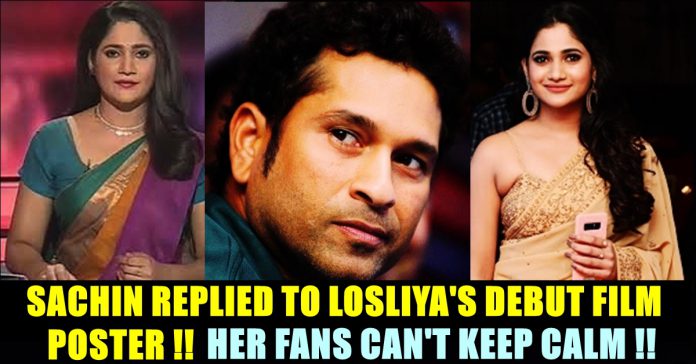 First look of Bigg Boss fame Losliya’s debut film released on 5th of June. The Bigg boss fame who became a overnight sensation through her Bigg Boss stint, earlier announced about her first movie project after several months of the reality game show, hosted by Ulaganayagan Kamal Haasan. Bigg Boss season 3 successfully ended with Mugen rao grabbing the title. Sandy became the first runner up where as Losliya was pushed to the third place. Since the show, Losliya was seen conducting photoshoots.

Many fan pages have emerged for Losliya as soon as she participated in the show. She is currently enjoying 8 lakh followers for her official Instagram account. She has been posting pictures from her photoshoots to keep her fans and followers engaged. Now, in a way of surprising her fans and followers, Losliya revealed the first look of her upcoming film.

The film which is going to have former Indian cricketer and current Chennai Super Kings bowler Harbhajan Singh in the lead role, has been titled as “Friendship”. The film also features action king Arjun. Sharing the title look of the post Losliya wrote “With all your love 💙 #motionposter #friendship”

Sachin Tendulkar who is considered as one of a greatest cricketer of the entire world, posted a tweet as a reply to Harbhajan Singh as both of them spent years as teammates. They also have a special bonding between them which became evident in certain occasions.

“Friendship ki hai toh movie toh dekhni padegi, Bhajji.” wrote Sachin in his reply which is roughly translated as “Have to watch this movie Friendship”. Check out his tweet here :

Though this tweet was made for Harbhajan, fans of Bigg Boss star Losliya started thanking the legendary cricketer through their replies.

Comment your views on Sachin replying to Bhajji’s debut film and Losliya fans getting excited about it !!