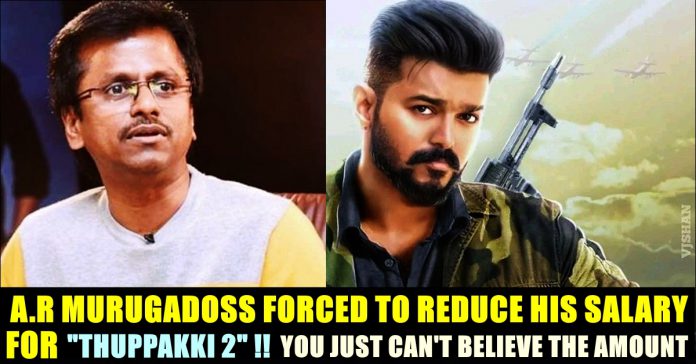 Vijay’s next film after “Master” is going to be the sequel of his blockbuster film “Thuppakki” as we all know. The film is going to be directed by A.R Murugadoss who directed the first part. A.R Murugadoss forced to reduce his salary for his upcoming film “Thuppakki-2” due to the loss incurred by his previous film Darbar and due to the mixed reviews of Sarkar. Now, a formal agreement has been locked between Sun Pictures and A.R Murugadoss for “Thuppakki-2” in which the salary of the Director-hero duo has been confirmed.

There were many speculations doing rounds about the director of actor Vijay’s upcoming film.Some said that the film is going to be directed by Atlee again and others said that director Perarasu who made Vijay’s “Thiruppachi” and “Sivakasi” is going to be roped in. Director Magizh Tirumeni also narrated a story to Vijay, according to sources. At one point, it was firmly believed that Vettri Maaran is going to direct Vijay in his next but the director subtly denied it by signing a film with Surya with a title “Vaadi Vasal”.

Sudha Kongara who is busy making Surya’s “Soorarai Pottru” became a front runner at one point and screened her film to Vijay, according to some sources. But it turned out to be mere rumour. However, many sources has confirmed that A.R Murugadoss is going to wield the megaphone for the next film of Vijay. Now, a report surfaced saying that A.R Murugadoss has faced a major setback in working for Thuppakki 2.

The film which is going to be produced by Sun pictures Kalanithi Maaran, is rumoured to have Pooja Hegde and Kajal Agarwal in the female lead roles. According to reports, Sun Pictures asked A.R Murugadoss to lower the budget of the film. The reduction, the production house demanded includes the salary of the filmmaker who was earning Rs.30 crores per film. Now, it has been concluded that Actor Vijay who earned Rs.80 crores for his previous film “Master”, is going to receive Rs.70 crores for Thuppakki 2. A.R Murugodoss drastically reduced his salary and is going to receive just Rs.10 crores.

However, as the film is going to be made in first copy basis, the “Ghajini” director is expected to make the film in limited budget to compensate his salary. Due to the loss incurred by his previous film “Darbar”, distributors who bought the film visited the residence of actor Rajinikanth and A.R Murugadoss. The filmmaker even requested police protection for his house by saying that the distributors are threatening him.

A.R Murugadoss debuted to tamil film industry through Ajithkumar’s “Dheena”. His third directorial “Ghajini” gave him the break of his lifetime as he remade the film in Hindi by having actor Amir Khan in the lead role. Since then A.R Murugadoss became one of the prominent filmmakers of Indian cinema. His “Thuppakki” and “Kaththi” gave actor Vijay a big time break as a mass hero. It is believed that Murugadoss bought more salary than Vijay while doing both the films. Their third collaboration “Sarkar” received mixed reviews among the fans. Let us wait and see if A.R Murugadoss gives a comeback through the sequel.