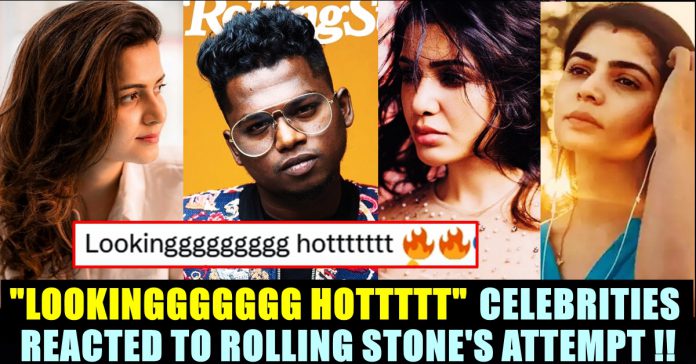 After the outrage caused by the users of Tamil social media platforms due to the non-existence of Arivu in the recent cover image of “Rolling Stone”, the magazine came up with “digital” cover featuring the independent artist alone. On seeing the post, many users of social media platforms came up with proud reactions with a number of them criticizing the magazine for releasing a “Digital” cover, that too after the online furore. Along with public, influential personalities such as Pa. Ranjith, C.S Amudhan, Samantha Ruth Prabhu, Chinmayi, Parvathy raised voice for the young and emerging talent, after the release of the magazine.

“BeyondBorders: Wordsmith, composer and rapper @TherukuralArivu appears on our August 2021 digital cover. Following acclaim for his album ‘Therukural’ with @ofrooooo, the Tamil artist has scorched a path out, raising his voice against systemic injustices” caption of Rolling Stone’s recent post read, cover image of which consisted one of Arivu’s close up picture. “The trailblazing Tamil rapper is the socio-political hip-hop, smashing records and defying social norms” it was written in the picture.

#BeyondBorders: Wordsmith, composer and rapper @TherukuralArivu appears on our August 2021 digital cover. Following acclaim for his album ‘Therukural’ with @ofrooooo, the Tamil artist has scorched a path out, raising his voice against systemic injustices

Welcoming the move, Samantha Ruth Prabhu uploaded a story in her official Instagram account, through which she is enjoying nearly 2 crore followers. She tagged Arivu and added a high five emoji before tagging the Instagram id of Rolling stone. Here’s the screen shot of her story :

Television actress Sharanya who is known for appearing in serials that is getting telecasted in Vijay Television shared the image and said “Athuu” , denoting that it is good for the magazine to make such decision.

Many others welcomed the movie of Rolling stone. However, few expressed their displeasure, saying that it is just an act of damage control from Rolling stone and said that Arivu still didn’t get the credits for what he did to “Enjoy Enjaami”. Read : Rolling Stone Released A “Digital” Cover For Arivu After The Outrage !! Check Reactions