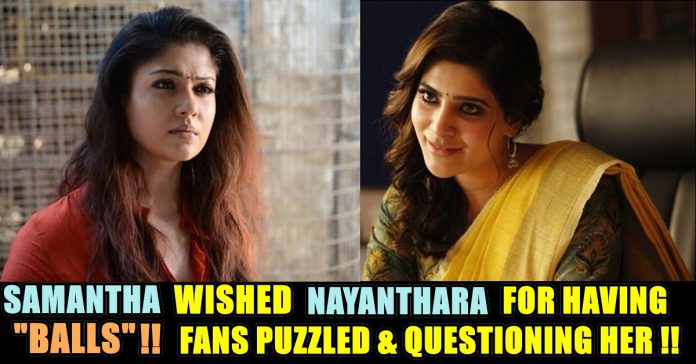 Trust Samantha to do the unusual!  Sam has appreciated  Nayanthara and her Kolamaavu Kokila after watching the sleek trailer.  She wrote on Twitter: “I know I am a little late.. the trailer of #Kolamavukokila is outstanding Can’t wait to watch this film . All the very best to this team and #Nayanthara for having balls of [email protected] #NelsonDilipkumar”

I know I am a little late.. the trailer of #Kolamavukokila is outstanding 👏👏 Can’t wait to watch this film . All the very best to this team and #Nayanthara for having balls of steel 🙏🙏 @anirudhofficial #NelsonDilipkumar Actor Yogi Babu’s role in Kolamaavu Kokila will leave you in splits and is seen wooing Nayanthara in the plot. The teaser of Kolamaavu Kokila has raised the expectations on the film amongst fans and is now the most awaited for film in the upcoming season. The music of Kolamaavu Kokila is rendered by Anirudh Ravichander and the first single, Kalyaana Vayasu, released a while ago has already become a hit number.

In an industry where heroines refuse to sign films together and ignore each other point-blank at events this sweet tweet has surprised everyone. Samantha has finished shooting for her pending Tamil films Seema Raja, U-Turn and Super Deluxe. The actress is currently on a break and she is said to have given her nod to Girisayya, a former associate of Sandeep Reddy Vanga of Arjun Reddy  fame.

Though Samantha did a small mistake while mentioning the director of the film Kolamaavu Kokila, Actor/ Dancer Sathish corrected her. Thinking of the director was not in twitter, Samantha just mentioned his name as #NelsonDileepkumar which was wrong as well. Sathish tagged him in the comment and corrected her. But the fans focused on her phrase she framed to praise Nayanthara. As she used the combination of words “Balls of steel” to praise the guts of Nayanthara for doing films with debut directors, most of the fans understood Samantha’s intention but felt bit uneasy which is evident through their comments.

Check out some of their comments :

Since childhood, I thought #ballsofsteel will apply only for boys. Thanks.. for changing my paradigm. Even girls will have balls of steel. Accepted & apprciated your own way of #Feminism. Love you! Steel than steel than

😀 “ balls of Steel “ too blunt a comment though but love it , usually people quote for guys .It remembers me our college times when we called a steel company to troll them & asked for “ Briefs made of Steel “ and we got a stunning reply “ is your balls made of steel “ 🤣🤣🤣

That too STEEL balls?.. come on.. that phrase itself is wrong… Don’t insult #Nayan just for the sake of tweeting something catchy..🙏🙏#KolamaavuKokila

What do you think on her wish ?? Comment below !!