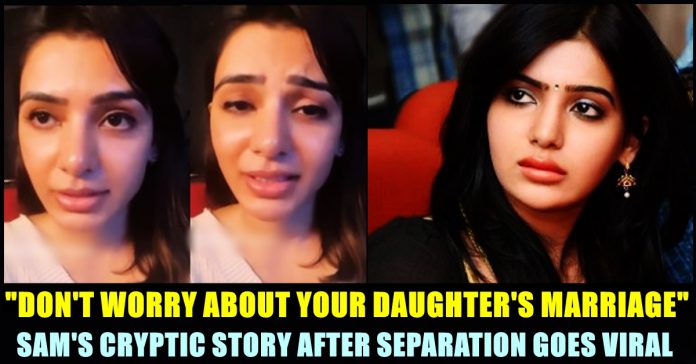 South actress Samantha’s regular Instagram story on on how to raise a daughter is making headlines as the actress recently announced about her divorce with Telugu actor Naga Chaithanya. In her Instagram space, Samantha shared the story of Indian hockey team captain Rani Rampal which talked about how a woman should be raised. Samantha tagged Rani and added biceps flexing emoji to extend her support.

The inspiring post was a message to the parents of girls. It was about educating daughters, making them financially independent and teaching them self love. The actress recently announced her separation with Naga Chaithanya and every post she uploads ever since making the announcement are making headlines with fans reacting in various ways.

“Make your Daughter so capable that you don’t have to worry who will marry her. Instead of saving money for her wedding day, spend it on her education and most importantly, instead of preparing
her for marriage, prepare her for herself. Teach her self-love, confidence, and that she can throat punch someone if she needs to” read the story shared by the actress.

Here’s the screen shot of the actress’s Instagram story :

Earlier this month, Samantha and Naga Chaithanya announced about their separation from marriage life, citing no exact reason. The duo said that they are going to pursue their own paths. “We are fortunate to have a friendship of over a decade that was the very core of our relationship which we believe will always hold a special bond between us. We request our fans, well wishers and the media to support us during this difficult time and give us the privacy we need to move on. Thanking you for your support” both their social media posts read.

Despite of the decision made by the actress, many users of social media kept requesting the actress to rethink about the same through the comment section of her social media posts. Few venomous online users started spreading baseless rumours about her as well. To all those who accused Samantha of having affairs, not wanting children, being an opportunist and of aborting a child, the actress came up with a note to shut them all down. The actress mentioned some of the rumours that emerged against her and said that she never let them break her. She who said that divorce is itself a painful process, expressed her frustration over the attack that is being made on her regarding her decision on divorce Naga Chaithanya.

In the meantime, Samantha has left to abroad for a new trip. She who recently came back from Char Dam Yatra, was accompanied by her close friend Shilpa Reddy to a spiritual trip. Samantha is all set to leave for her second trip after her separation.