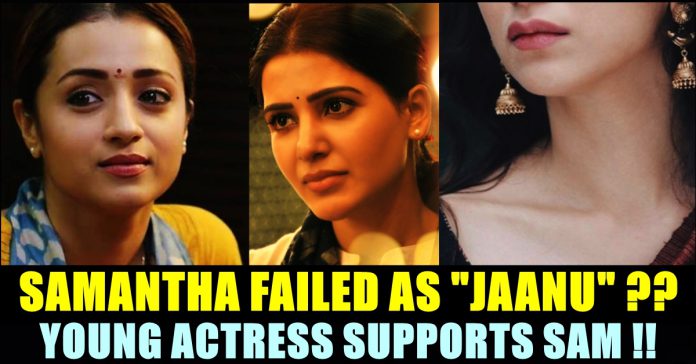 Media portals spreading news about a movie’s performance at the box office to create sensationalism has became common nowadays. When it comes to the movies of high profile celebrities, to attract their fans, many media portals can bee seen concluding the result and its box office numbers in their space. In a similar way, a popular media website said that actress Samantha lost one of her opportunity to pair with actor Sharwanand by saying that her recent film “Jaanu” flopped.

“Jaanu” is a remake of Tamil blockbuster “96” in which Vijay Sethupathi and Trisha essayed the lead roles. As we all know, 96 is a very special film for Tamil fans and it’s also the first time that Trisha is sharing the screen space with Vijay Sethupathi. The film revolves around the reunion of former students from a 2004 batch class fifteen years after their graduation. The reunion also serves as an opportunity for two former lovers, Ram and Janu, to resolve issues surrounding their breakup.

A latest report of a north india based Cinema website named as Bollywood Hungama said that Samantha lost the opportunity to act in Maha Samudhram along with her “Jaanu” pair Sharwanand due to the flop of the coming of age love drama. The news further said that “Psycho” actress Aditi Rao Hydari replaced the “Super Deluxe” actress. The news also said that Naga Chaithanya was supposed to do the protagonist role and replaced by Ravi Teja. “The thundering flop of Ravi Teja’s Disco Raja made the makers to replace him with Sharwanand” the news reported.

This news grabbed the attention of actress Aditi Hydari as she got mentioned while the news was published. The actress who got extremely disappointed expressed her disagreement with the news by issuing a statement through her official twitter account. She wrote “I genuinely feel this is important to say… a hit or flop cannot take away the credibility of an actor. Pl Let’s not encourage this kind of thinking. secondly lets give a director/producer the respect to make their announcements in the way that they deem fit. Thank you 😊”

I genuinely feel this is important to say… a hit or flop cannot take away the credibility of an actor. Pl Let’s not encourage this kind of thinking.
secondly lets give a director/producer the respect to make their announcements in the way that they deem fit. Thank you 😊 https://t.co/1GOmREheud

Aditi got introduced to Tamil film industry through Manirathnam’s “Kaatru Veliyidai”. She continued to appear in Tamil films and in some other south Indian movies. Samantha who was last seen in “Super Deluxe” in Tamil is about to give her come back through Vignesh Shivan’s “Kaathu Vaakula Rendu Kaadhal” in which she is going to have Vijay Sethupathi and Nayanthara as her co stars.

What do you think on the way Aditi defended Samantha ? Comment your views !!