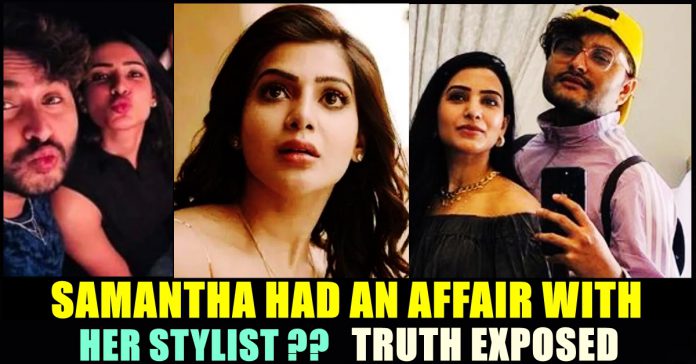 Samantha’s stylist who is a also renowned celebrity stylist in film industry, opened on the rumours that linked up himself and the actress as an effect to the recent announcement made by the actress regarding her marriage life. It has been reported that rumour mongers cited Samantha’s “affair” with her stylist Preetham Jukalker caused the rift between herself and Naga Chaithanya.

They who went on to character assassinate the actress and also sent death threats to the stylist through Instagram. Opening about the same, the stylist said that everyone knows that he calls Samantha as “sister” and also expressed his dejection over Naga Chaithanya not putting a full stop to the rumours by issuing a statement from his side as he very well know about the relationship between himself and Samantha.

Most recently, South Indian Actress Samantha came up with a note in her official social media handles, brushing off the rumours and speculations that surfaced against her after her divorce. The actress mentioned some of the rumours that emerged against her and said that she never let them break her. She who said that divorce is itself a painful process, expressed her frustration over the attack that is being made on her regarding her decision on divorce Naga Chaithanya.

To all those who accused Samantha of having affairs, not wanting children, being an opportunist and of aborting a child, the actress came up with a note to shut them all down. She said that no kind of baseless allegations that are emerging against her can break her, through her press note.

Now, the actress’s stylist Preetham whose pictures with Samantha became a subject to controversy as trolls linked him with the actress, came up with a public note. “Everybody knows that I call Samantha as “Ji Ji” which is north Indian term for sister. How can there possibly be a link up between us ? People are commenting how can I say “I love you” to her. Can’t you express love for a sister or a friend ? How can people stoop so low and spread such malicious rumours when a woman is already hurting. This is just disgusting and heart breaking” Preetham said in his post.

Preetham went on to express his dejection over Chay keeping mum about the issue. “I have known Chaithanya for years. He too knows the kind of relationship that I and Samantha have. I feel that he could’ve spoken up and told people not to comment like that about Sam and me. Even if he had issued one statement, it would have made a lot of difference. Right now, it’s these so-called fans who are making these statements and spreading false rumours. I think a statement from Chaitanya’s side would’ve helped keep these people in check”, Preetham said in his statement.

Adding the post of his interview, Preetham wrote “Hold the truth and defend the truth until death”. Nothing is going to stop me from standing up for my Jiji & best friend 🌻 @samantharuthprabhuoffl you know I always love you for being what you are, you’re an example for all of us in every possible way.. saying it again with so much pride “I Love you JIJI “ ❤️since this is where it all started from …!” in his post as a caption.