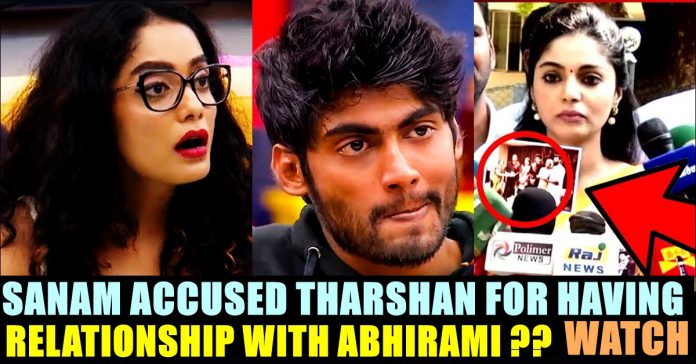 The controversial blame game between Bigg Boss fame Tharshan and popular model Sanam Shetty is continuing after the press meet provided by Tharshan amidst media. The problem between Tharshan and Sanam Shetty started when the model registered a police complaint against Tharshan for cheating her. She has filed complaint against Tharshan for cheating, fraudulent, breach of trust, women harassment and threatening in the commissioner office, Chennai.

Now in a recent interaction with media, Sanam Shetty has revealed how Abhirami Venkatachalam treated her when she approached her for help. Sanam Shetty who went to meet the parents of Tharshan said that she was disrespected by his friends and said that they pushed her out of his home literally. Tharshan, on the other side, says that his Mother has no objection for their marriage. “She only asked us to marry after thinking about it several times” said Tharshan in the interaction.

Further Sanam Shetty said that she said Abhirami Venkatachalam to seek help in reuniting with Tharshan. “When I approached her for help, she completely stopped me. When I asked her why she is behaving that way she simply asked me to consult a doctor and said that I have mental imbalance. I never expected these things to happen at all” said Sanam shetty whereas Tharshan denied her accusation completely.

“Sanam Shetty accused me by saying that I have a link with Abhirami Venkatachalam. She asked me why I am referring her to go to Malaysia with me and blocked her in Instagram. So far Abhirami only talked to me in a way of supporting her. Abhirami only wanted us to be together” said Tharshan as an answer to her accusation.

Watch the statements of both of them below :

Tharshan, in a way of answering to her allegations, gathered a press meet and gave a brief clarification. Tharshan has said that he bought no money from her and paid back the only three and half lakh rupees she spent for him after he received the payment from Bigg Boss. Tharshan said that Sanan Shetty blackmailed him to kill herself and demanded him to declare her as his fiancee in front of media. “I didn’t like the bikini interview she gave to a youtube channel. I heard about her behaviour with her Ex-boyfriend, in a night party, through former Bigg Boss contestant Ramya and Sathya. I won’t file complaint against her but will produce the proofs in commissioner office if it is required” he said.

What do you think on these statements of both of them ?? Comment your views below !!