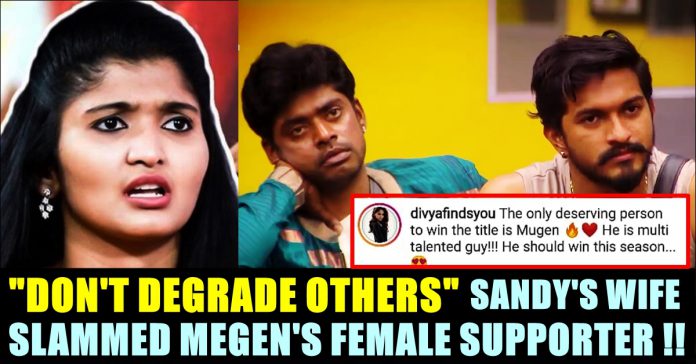 Bigg Boss Tamil show’s third season is running past 100 days with four finalists Sandy, Mugen, Losliya and Sherin. Fans of the respective contestants are voting for their favourite contestants tirelessly. The Kamal Haasan hosting reality game show will see its end by this weekend.

Today, as the show marks its 102nd day, three promos were released in the social media accounts of the television. One of a promo had Sandy sharing the experience he gained throughout the Bigg Boss show. He said that he discovered an unknown face of himself by participating in the show. In the promo, he also said to the guests that staying away from fights will entertain one in the show.

Check out the promo here :

In the comment section of this promo, many viewers commented. One of a supporter of Mugen, in the comments section said that Mugen is the only deserving person to win the title. She also said that he should win this season as he is a multi talented guy.

Many confronted this statement, particularly, this comment from the Bigg Boss viewer offended Sandy’s wife Sylvia it seems who expressed it in her comment. She asked her not to degrade other contestants to support her favourite.

Check out the screenshot of their conversation below :

Sandy and Mugen are sharing a healthy friendship inside the house, a healthy bromance to be precise. In the 102 days, they never had contradictory statements with each other. Sandy is one of the mischievous contestant in the Bigg Boss house. Being one of the very few contestants who is loved by almost every contestant inside the house, Sandy doesn’t got nominated for eviction till 50+ days. He doesn’t involved in any verbal spat with the contestants until “Native task” in which he was confronted by Madhumitha.

Mugen, on the other hand, impressing the audience with his unique set of skills and with his charming looks. He is one of the promising contestant inside the Bigg Boss house, is likely to win the title as well. Originated from Malaysia, the singer and aspiring actor has already gained a separate fan following in Tamilnadu. Known for his short temper, Mugen lost it couple of times inside the house and both the time he did it infront of Abhirami Venkatachalam, actress of Nerkonda Parvai.

What do you think on the fans of both these contestants fighting with each other ?? Comment your views below !!