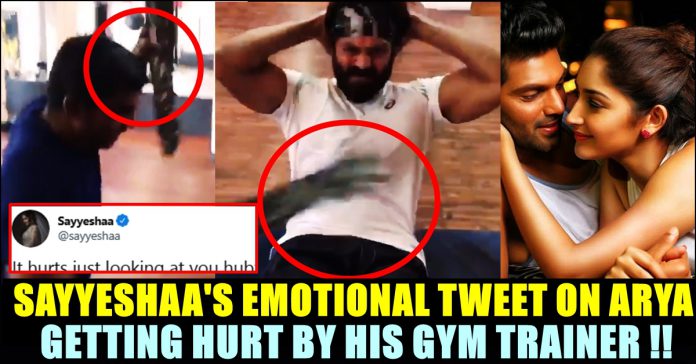 Actor Arya is busy working out in Gym to appear as a boxer in his upcoming film “Salpetta” which is going to be directed by Pa.Ranjith. The actor who is known as one of the very few fitness freaks in Tamil film industry, released a video of him working out in Gym on Monday.

In the video, we can see Arya working out on his abs. To get a better result, his trainer can be seen hitting Arya’s stomach with a rubber kind of material after every count to increase the count. Sharing the video, Arya wrote “Sometimes u need to push Harder for Greater Results” with the hashtags saying “Pa Ranjith film”, “Arya 30”, “Pre look” etc.

Many of his followers lauded this kind of effort from the actor before starting shoot of a film. Check out some of their reactions below :

After #ChiyaanVikram , The Man Who Work hard for Cinema is @arya👍

The most unexpected reaction that Arya received is from his wife Sayyesha with whom he got married recently. Sayyesha who is also an actress acted along with him in the movie “Ghajinikanth” and “Kaapaan”. The 22 year old expressed her emotion by saying that she gets hurt on seeing him in this state. “It hurts just looking at you hubzy!! Too much hardwork! #proudwife” she wrote in her reply.

Here’s how Arya responded to the tweet of Sayyeshaa :

After so many rumours, link ups and Enga Veetu Mappillai controversies, Arya announced about his engagement with Sayyesha on the lovers day of 2019. The couple got married on 10th of March in the same year.

“Salpetta” or “Salpetta Parambarai” is believed to be a biographical picture of Indian tribal freedom fighter Birsa Munda. The film is going to be shot in and around Chennai. The film also going to have Dinesh, Kalayarasan in prominent roles. According to Times of India, Pa Ranjith wanted to make Salpetta right after doing “Attakathi” but postponed it due to Madras, Kaala and Kabali.

My love for sports coming alive on screen
All set to face the boxers in the ring with @beemji sir for our next 💪 It’s the most challenging film of my career. Loving the experience. #Ranjith sir is just phenomenal 😍😍😎 @Music_Santhosh @K9Studioz #AnbuArivu #Murali pic.twitter.com/1ejKMipNYh