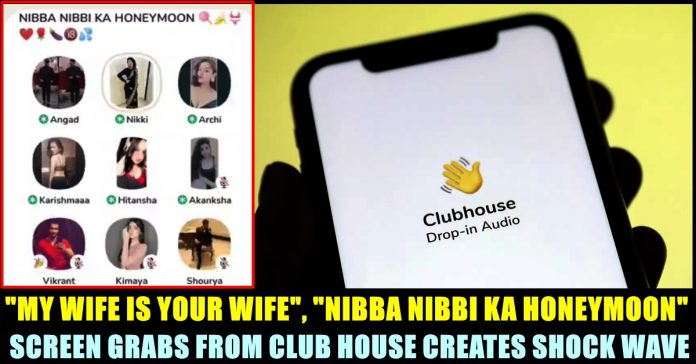 A number of screen grabs which were captured during the conversations that took place in Club house, audio chatting platform, are creating shock waves in other social media platforms such as Twitter, Facebook, Instagram etc. Through the app, youngsters of the current generation could be heard involving in intimate conversations with hundreds of people listening to them. Headline of the latest video which is doing rounds in Internet reads “NIBBA NIBBI KA HONEYMOON” with the emojis of heart, banana, inner wears, Brinjal, 18+ etc.

Being an invitation-only social media app for iOS and Android, Club house mobile application lets users to communicate in voice chat rooms that accommodate groups of thousands of people. The audio-only app hosts live discussions, with opportunities to participate through speaking and listening. After Twitter Space came to the trend, Club house which is exclusively made for group voice chat, is being widely used by the youths nowadays.

Discussions on various topics such as Sports, Business, Career, Education, Cinema, Love, Relationships, Sex are being conducted in club house. Those who are creating a new room with a title are called as “Moderators” and those who are joining in it after seeing the room’s name are called as “Listeners”. Moderators can choose people from “Listeners” to speak on the topic and the listeners are provided an “hand raising” option to let the moderators know that they are ready to speak.

In clubhouse, rooms with controversial/catchy titles would have more listeners comparing to the rooms that contains appropriate titles, related to the topics that are being discussed. Now, a screen grab from a room named “NIBBA NIBBI KA HONEYMOON” is doing rounds in Internet with various kind of reactions. Through the audio, it could be understood that the youths who took part in the room are playing a “Chumma Chumma” game.

In the room , Moderator advises speakers to sue the mic properly to avoid glitches and another moderator goes on to explain the game they are going to play. The game requires a boy or girl to sing the “Chumma Chumma” song and name a fellow speaker they like. If he/she is interested, she can give him/her a kiss through the audio only app.

Yrrr what is this game? I am crying Lmao 😭😭😭 pic.twitter.com/CQgj7q7uGI

Many people who came across the screen grab, couldn’t believe what they heard as it contained something that no one saw coming from the new age youngsters. “These Rich kids are a big disgrace to the nation , they have nothing to speak about what’s going on around them and start all these bull shit things” a user wrote whereas another one said “lost most of my braincells after watching this”

Check out some of such comments below :

These Rich kids are a big disgrace to the nation , they have nothing to speak about what’s going on around them and start all these bull shit things😵‍💫 https://t.co/RVaLVdEyyQ

lost most of my braincells after watching this 🤢🤮 https://t.co/fe20gRrQRc

I once came across a Space where everyone was moaning. https://t.co/t0wKnhdoCU

Similar rooms are taking place among Tamil speaking youngsters as well. Rooms such as “My wife is your wife”, “Maami Kada Masala vada” are being conducted in daily basis with thousands of listeners.