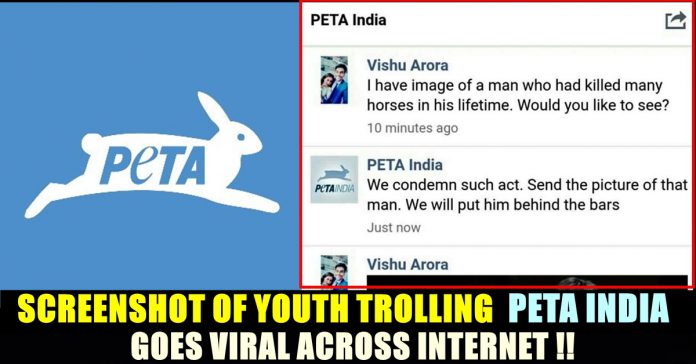 A screenshot of a youth named as Vishu Arora trolling PETA organisation is trending in social media platforms. People for the Ethical Treatment of Animals organisation which is also called as PETA, is known for acting against animal violence. “Animals are not ours to experiment on, eat, wear, use for entertainment, or abuse in any other way” is their slogan. Being the largest animal rights organization in the world, with more than 6.5 million members and supporters, PETA reports to one million followers in the micro blogging social media site and to 1.4 million followers in Facebook.

The organisation urges every citizen of our country to contact them if any kind of animal violence comes to our notice in order to rescue them. A youth named as Vishu Arora whose bio says that he belongs to Dehra Dun, India, contacted them through Facebook to report about a man who killed many horses in his lifetime.

“I have image of a man who had killed many horses in his lifetime. Would you like to see” asks Vishu to Peta India through text. “We condemn such act. Send the picture of that man. We will put him behind the bars.” the reply he received from PETA INDIA reads.

The facebook user attached a picture of chess grandmaster and a former five time classical world chess champion, Viswanathan Anand and sent it to them which they didn’t see coming. The user didn’t stop there as he captured the screenshot and posted it in his facebook account which is going viral in other social media platforms now. The horses Vishnu mentioned are indeed horse shaped knights in the game of Chess which Viswanathan Ananthan has been killing all these years.

Check out the viral screenshot below :

Followed by this, the youth added another screenshot of a conversation which was captured 2 years back, according to him. In the screenshot, he alleges people are killing gorillas and making money out of it only to mention the Gorilla tempered glass which is being used to guard cell phones.

Though we couldn’t conclude whether these conversations were originally made or photoshopped one, these are trending in Internet with hilarious captions. Tamil actress and former Bigg Boss star Kajal Pasupathi shared the screenshot and wrote “That bulb vangum moment, 2 mins silence” as her caption.