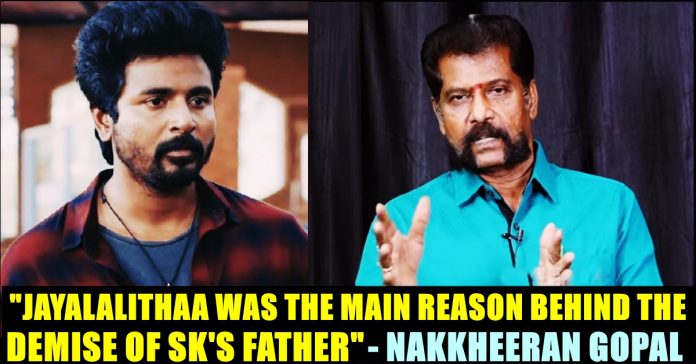 Days ago, a statement regarding the demise of actor Sivakarthikeyan’s father made by BJP politician H. Raja went viral in social media platforms. He said that the name of actor Sivakarthikeyan’s father is Jayaprakash and stated that the cause of his death was murder. Now, completely denying his statement, senior journalist Nakkheeran Gopal, released a 14 minute long video in his youtube channel. He slammed Raja for making baseless statements without being able to win, at least one MLA seat.

The BJP politician alleged that Jayaparakash was killed by a politician who is still in power and said that he feels bad to talk about it in an interaction with the press reporters. The statement has shocked the public who are aware of the emotional bond Sivakarthikeyan has with his father. H. Raja uttered the statement while condemning Dr. P Thiaga Rajan (PTR), Minister for Finance & Human Resources Management, Tamil Nadu for his recent statements about Sadhguru.

“The current MLA of Papanasam constituency is an accomplice of the one who killed jailor Jayaprakash. Popular Tamil actor Sivakarthikeyan is the son of Jayaparakash. Don’t you have any shame ? You think that anyone can demean the Hindi religion?” Raja said in a statement which made headlines.

However, it is widely believed that H. Raja has mistakenly dragged the name of Sivakarthikeyan’s father as reports suggests that the cause of Mr. G. Doss’s demise is natural. Now, a video was released by senior journalist Nakkheeran Gopal regarding the actual reason behind Doss’s death. In the video, Nakkheeran says that he came to know about the Father-son relationship between Sivakarthikeyan and Doss only when he visited the former’s house to invite him for his daughter’s marriage.

Nakkheeran said that he got shocked to know about it as he was familiar with Doss during early 2000s. The senior journalist acted as a middle man between Tamil nadu nadu government and Veerappan who was surviving in the forests committing crimes on the Tamil Nadu – Karnataka border, hoodwinking the police of the two states. When Veerappan kidnapped Kannada actor Rajkumar, Nakkheeran visited the former and received message from him about his demand to release the actor.

According to the latest video, Veerappan wanted 5 Tamil terrorists who were spending time in Trichy jail to be released in exchange of Rajkumar. Nakkheeran who received the message from him, conveyed it to then chief minister Karunanithi and was supposed to meet the terrorists in Trichy jail to send them their message from Veerappan. Sivakarthikeyan’s father Doss was serving as the superintendent of Trichy jail at that time. When Nakkheeran visited the Trichy jail to meet the 5 terrorists to convey them the message sent by Veerappan, he met Doss and they talked about getting Sivakarthikeyan a job in media field, according to the recent video of the journalist.

However, after the change of governance in the year 2001, Nakkheeran says that he heard about the demise of Mr. Doss and it was due to heart attack. In the video, he goes on to explain what really happened behind the demise of Mr. Doss. “When I inquired about the death, I came to know that Policemen of J. Jayalalithaa tortured Doss annan. They demanded him an affidavit against myself and former chief minister Karunanithi saying that we planned the kidnap of Rajkumar through Veerapan to release the five prisoners” Nakkheeran Gopal says in the video.

“DIG Mohammad Ali, with the order of J. Jayalalitha tortured Doss to issue an affidavit against us. Doss could have simply made one but he was an honest man. Doss died of massive heart attack due to the pressure he faced from the police. Main reason behind Doss’s demise was J.Jayalaitha and Mohammad Ali.” said Nakkheeran Gopal and expressed his admiration towards Sivakarthikeyan on his massive growth as an actor.