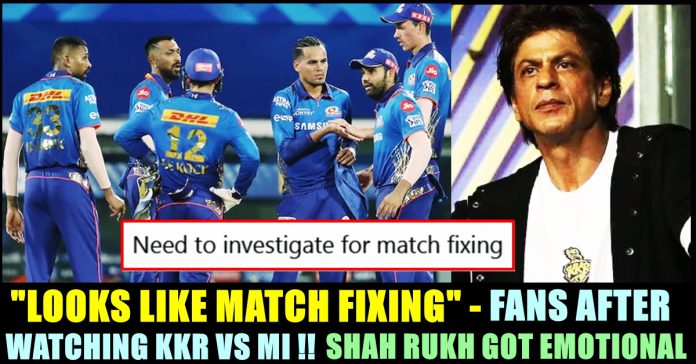 The unexpected loss of Kolkata Knight Riders against Mumbai Indians left the internet discussing about it with the fans of the team expressing their dejection. Actor Shah Rukh Khan, one of the owners of the team, uploaded a tweet in his official twitter account regarding the loss. He who felt disappointed, asked apologies to the fans. Many other players of the team came up with tweets expressing their emotions.

Braver, stronger from here on. pic.twitter.com/esbqomPh88

Team Kolkata Knight Riders lost a match that required them to score just 31 runs off 30 balls with 6 wickets in hand. At the end of 40 overs, Mumbai Indians defeated Kolkata Knight Riders by 10 runs which was something no one saw coming. ‘Yes, disappointing. Played some really good cricket for most parts of the game, we looked comfortable in the chase, but they are a strong team, came back well and sad that it didn’t work out for us. Made a few mistakes, will need to sort it out. A perfect game needs to be bold, it came to cost us in the last 10 overs of the game ” said KKR captain Eoin Morgan.

“Gutted, it was a tough night for knights , will come back stronger” wrote Nitish rana in his tweet after facing the unexpected loss.

Gutted 💔💔💔💔 it was a tough night for knights , will come back stronger 💪🏻 @KKRiders

Disappointing performance. to say the least @KKRiders apologies to all the fans!

Many of the fans of KKR team, out of sorrow, came up with tweets accusing the match of being a fixed one. “If u feel no fixing and betting is involved on this match then u must be joking!!” a fan said in his tweet whereas another one wrote “I really loved the script. #MIvsKKR #fixing”

#MIvsKKR
If u feel no fixing and betting is involved on this match then u must be joking!!#MIvsKKR pic.twitter.com/NWPzcZd533

Some things that you can use for fixing #KKRvsMI pic.twitter.com/KxQumBj1BV

😳 is there any fixing running in ipl? 😑

All are praising MI bowlers but MI teammates only knew it is match fixing #MIvsKKR pic.twitter.com/aoXALlbrah

For a maintenance. For Match
Of players Fixing pic.twitter.com/SidOiW5GV1

Need to investigate for match fixing

Trust me, I don't know abt other matches, this looks exactly #MatchFixing. DK not even trying to hit boundary in 17th and 18th overs,