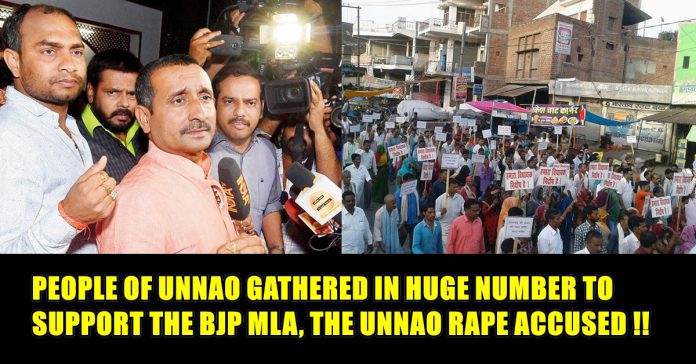 Unnao rape case accuse BJP MLA Kuldeep Singh Sengar today received huge support from the people of Bangarmau, Safipur, Bighapur and adjoining area. Tons of people gathered and held rally in support of the MLA, this is just like Kathua where lawyers supported the accuse and took out a procession against the police filing the charger sheet.

Holding placards saying ‘Humare vidhayak nirdosh hai (Our legislator is innocent)’, protestors at the rally claimed that the entire incident is part of a political conspiracy, according to a News18report. According to News18, Nagar panchayat president Anuj Kumar Dixi said, “It is a political conspiracy to defame our MLA. He is innocent and being framed in false charges. We demand a neutral and independent enquiry into the matter.”

Jammu and Kashmir’s Kathua district has witnessed similar protests in support of special police officer Deepak Khajuria, one of the accused in gangrape and murder of an eight-year-old – a case that has sent shockwaves throughout the country. The right-wing Hindu Ekta Manch led the J&K rallies where also the protesters – which included leaders of the ruling BJP – claimed the accused in the case were unfairly targeted and demanded a CBI probe into the matter. Sengar was booked by the state police last week and is presently lodged in jail.

The Uttar Pradesh government had on Friday withdrawn the ‘Y’ category security cover from Sengar, a day after the CBI had taken the victim and her mother to Makhi village to recreate the crime scene and probe the murder case of the girl’s father. ‘Y’ category has a security cover of 11 personnel.

A rally was then organised by Hindu Ekta Manch in favour of the accused men.  Two BJP minister in the Jammu and Kashmir government, Choudhary Lal Singh and Chander Prakash Ganga, were part of the rally.

Sengar is accused of raping a 17-year-old woman along with his brother and aides in June last year when she was a minor. A year later, when the matter came to light, the survivor’s father was allegedly beaten to death by Sengar’s brother while the former was in police custody.

The widespread anger both within and outside the country over the handling of Kathua and Unnao cases, and the rising incidents of rapes of minors, led the Narendra Modi government to pass an ordinance on Saturday prescribing the death penalty for those guilty of raping children under the age of 12. In addition, the cabinet also cleared harsher punishments for those who rape girls under the age of 16.

Critics of the death penalty, however, say that the certainty of capital punishment is also likely to lead child rapists to murder their victims in order to reduce the chances of being caught and convicted.