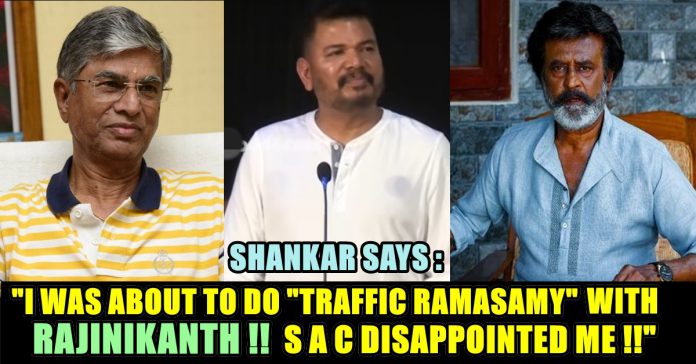 It’s a well-known fact that SA Chandrasekar is acting in the upcoming biopic on the controversial social activist Traffic Ramasamy. The makers have already released the teaser cut of the film, which surfaced on YouTube and several other platforms. Interestingly, the teaser was launched by none other than Sagayam IAS. ‘Traffic Ramasamy’ looks to be an intense social drama that revolves around the life of the activist, who’s known for filing maximum number of court cases in Chennai. More than a biopic, it is expected to narrate some important incidents faced by the activist. The film’s audio songs released yesterday where Director Shankar, a former assistant of SA Chandrasekhar attended the event. He said “Traffic Ramasamy is an inspiring character who fights against anyone and everyone who goes against the law. I used to be astonished while reading articles in the newspaper about his heroics. I have clapped for him inside my heart.

Even I had a thought of directing a film about an inspiring character like Traffic Ramasamy. He is an INDIAN without a knife (recalling his classic hit movie), can also be termed as an old Ambi (Anniyan character). So I kept thinking of doing a movie about him. I even thought of directing his biopic with Rajini sir in the lead as it would be apt for his age. So after completing Enthiran 2, I thought I will meet Ramasamy sir, talk to him about his life and shape up my script. That’s when I heard about the Traffic Ramasamy film announcement. I was initially disappointed, but when I heard it was being done by SAC sir, I felt very happy. He is a very apt actor for this role because I know his anguish against the miscreants in the society. I really wish to watch this movie on the screen when it releases. I wish the entire all the best.”