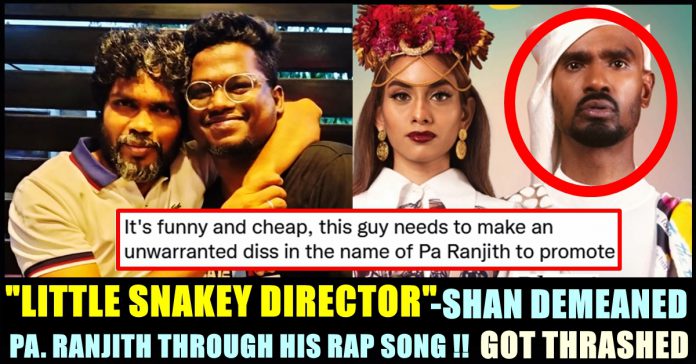 After releasing a public note to explain people about his stance, Shan Vincent De Paul came up with a rap song to express his emotions about the issue that took place due to the cover picture of “Rolling Stone”. The song consisted lyrics such as he never met “Arivu” before and termed director Pa. Ranjith who spoke about the erasure of Arivu as “Snakey”. He also accused Ranjith of forcing Santhosh Narayanan not to feature him in a project and said that he tries to “divide” him with others. The video he uploaded in Twitter caused so many reactions from people who believed that it was never about him but about the reluctance from leading platforms to recognize Arivu.

Along with Pa. Ranjith, several other celebrities including C.S Amudhan, Samantha Ruth Prabhu, Chinmayi, Parvathy raised voice for the young and emerging rapper, after the release of the magazine which lacked his image. August 2021 cover of Rolling Stone Magazine which promotes the Independent music videos “Enjoy Enjaami” and “Neeye Oli” grabbed headlines after the authorities of the magazine decided not to use the picture of Arivu, the lyricist who wrote lyrics for both the songs. Along with director Pa. Ranjith, many people who became aware of the magazine’s cover has been calling out “Rolling Stone” through their tweets and reactions.

Calling out the magazine, Pa. Ranjith, in his tweet wrote “Arivu, the lyricist of #Neeyaoli and singer as well as lyricist of #enjoyenjami has once again been invisiblised. @RollingStoneIN and @joinmaajja is it so difficult to understand that the lyrics of both songs challenges this erasure of public acknowledgement?” to express his displeasure over the cover image.

In a now-deleted Instagram post, Shan who termed Pa. Ranjith’s tweet about the erasure of Arivu in the cover picture of “Rolling Stone” magazine as sh*t, said that the filmmaker know absolutely nothing about what he discussed through his tweet. The post gained the artist so much hatred as a result of which he deleted the post. After releasing a detailed clarification, he came up with a rap song and expressed his emotions through it.

Shan, through his song said that he proudly said to his daughter about himself getting featured in the cover of “Rolling Stone” and they were cherishing the moment when a message from a friend advising him to stay off twitter surfaced on his phone. He said that had no issues with anybody and also made sure that he never met Arivu. “They been trying to wipe us, Eelam Thamils out for some decades, you think some photoshop supposed to phase me ?” he asked through his song.

He further termed director Pa. Ranjith as “Little Snakey Director” and said that he tries to divide him from others. He accused him of forcing Santhosh Narayanan not to hire him and says that the “Kaala” maker couldn’t tolerate seeing his name in the credits. Check out his rap song below :

Many dropped comments defending Ranjith on seeing this song from Shan. People criticized Shan, suggesting him to understand what Ranjith was trying to say through his tweet and also dropped memes denoting that Shan has nothing to do with the situation. Check out some of the reactions below :

Very proud of and deep admiration for @TherukuralArivu and @beemji who continue to show class in handling/facing this issue.
P.s: yes yes saw that silly rap.

If u have not met Arivu in person,
At least do a video chat with him, man.

And these👆..
THESE👆 ranting lines u have written about the issue are just cruel & wicked, man !!😡😠

Did you even take a minute to try and understand what Pa Ranjith was trying to say? Wouldn't it be the decent thing for you to acknowledge Arivu's contribution even if @RollingStone doesn't? #Arivurocks #ShanVincentsucks #Arivu

Okay but who is goona tell this guy? 🤦

Man this was not about you. But abot Maaja. Please for the love of God stop confusing everyone

Dude everything is not about you…cringe

@RollingStoneIN cover issue about @TherukuralArivu being left out has nothing to do with you @shanvdp
Its like somehow this guy wanna be a victim of something and put up a fight where none is warranted! pic.twitter.com/jmquGcOV2K

Such a clout chaser. No one’s literally hating you, people just stopped supporting you after your clown act that’s all. Bro all you had to say “ @TherukuralArivu is missing in this poster” People just expected you to do the right thing smh https://t.co/doVGPLn7yr

'i dont got no beef with arivu i never met him' nee chicken saaptalum beef saptalum idc fam this entire thing you are pulling is making me lose respect for you and your art :/ https://t.co/JpcvmZuxDC

You can't just taste success, you need to handle success too . I don't know about you but Ranjith knows how to handle his success. That's why he didn't throw you under the bus although you placed yourself below. https://t.co/CPC4l7gj1x

It's funny and cheap, this guy needs to make an unwarranted diss in the name of Pa Ranjith to promote himself. How about you relay on your talent, you insecure piece of shit. @shanvdp https://t.co/rWph8XvcPy