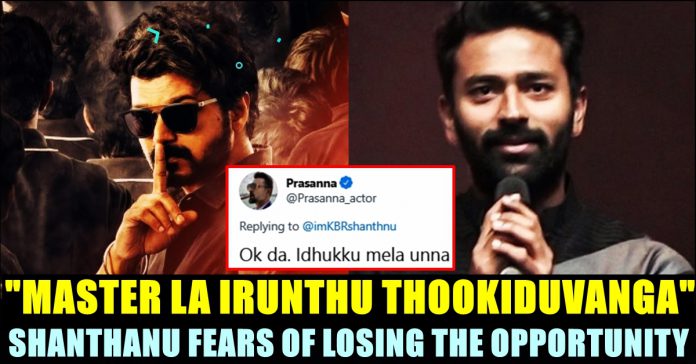 Along with the fans of actor Vijay, celebrities also eagerly waiting to witness the movie “Master” in which Vijay and Vijay Sethupathi are going to act as protagonist and antagonist respectively. The makers have released the first three posters of the film and it impressed the audience in big time. Apart from the leads Malavika Mohanan, Shanthanu, Arjun Das, Andrea Jeremiah are some of the other actors who are involved in the project.

The first look impressed the fans and followers of Tamil cinema as it broke the stereotypes of first look posters. Unlike other first look posters of actor Vijay, this one didn’t give any idea about the plot or genre of the film. The second look posted also featured actor Vijay alone while the fans expected Vijay Sethupathi to take place in it. It had the lead actor donning a black dress with cooler with finger in his lips in way of telling the students in front of him to keep quiet. The third look featured the face off of Vijay and Vijay Sethupathi.

Now fans are expecting the makers to give the next update about the film such as the release date of teaser or the audio launch. Artists who are associated with the project are facing the constant pressure from fans about the update. Now actor Prasanna who is known for acting in films like Anjathe, Thupparivalan also joined the fans and started demanding for update.

In a recent video interaction, Prasanna asked update to actor Shanthanu by imitating his father and legendary filmmaker Bhagyaraj. Watch the video of it here :

On seeing this video, Shanthanu reacted by saying that he will personally call him and give him the update. “Hahaha too cute 😘😘💛💛 machi . . I’ll call u and tell u update 🔥🤩🤪🤪” he wrote in the tweet.

To answer Prasanna, Shanthanu said that he will be terminated from the movie if he gives any update about the film without their knowledge. “If I tell any update now, My shooting call sheet for remaining days will get automatically cancelled” said Shanthanu in his tweet.

Here’s the further conversation between the actors :

This tweet from the actor was well received by the fans of actor Vijay. On the work front, Shanthanu’s Vanam Kottatum” has released in theatres today and the actor is expected to appear in an important role in “Master”.

What do you think on the way Shanthanu replied ?? Comment your views below !!