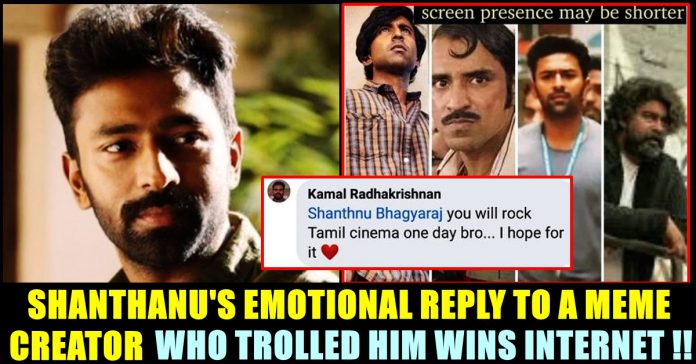 Ever since the film “Master” released in the theatres of Tamil nadu, trolls targeting the supporting actors of the film kept surfacing in the internet. Based on their limited screen time, users of social media platforms made memes to troll the actors of the film. Shanthanu, Dheena, Andrea, Malavika Mohanan, Sanjeev became the primary victims of the mindless trolls in social media.

In the film “Master”, Shanthanu played the role of Bhargav, a college student with an influential background. He who initially dislikes Gouri Kishen for opposing him in the college election, ends up having a strong mutual bond with her. However, Bhavani, to avenge JD, kills him by staging a road accident. Many fans who expected Shanthanu to play a significant role in the film, started trolling him after seeing the movie.

A scene where JD defines Bhargav as a deadlier rowdy comparing to all the henchmen of Bhavani, became a widely used meme template in recent times due to the flaw in the character arc of Shanthanu in the entire film. The actor reacted to the trolls that emerged regarding “Bhargav”, a number of times in social media platforms. Now, to troll the role sarcastically, a meme creator compared the actor’s role with some of the highly lauded characters that took place in films such as “Sarpatta parambarai”, “Jagame Thanthiram” and “Master”.

“Screen presence may be shorter but their performance was lit” read the meme’s caption. Sharing the post, a meme page wrote “A meme by Shanthnu Bhagyaraj” to troll the “Chakkarakatti” actor.

Among the trolls and criticisms the post received, actor Shanthanu himself dropped a comment under the post, writing “Whoever created this meme, hope it made you happy” and added a smiling emoji.

On seeing this comment from him, the actor was encouraged by hundreds of fans. Many appreciated Shanthanu for the role he played in “Thangam” short of Sudha Kongara and advised him to ignore comments that spews negativity at him. Check out some of the replies Shanthanu’s comment garnered :

On the work front, the actor is expected to be seen in “Ravan kottam”, “Murungakka Chips”, “Kasada Thapara” etc. He recently got highly appreciated for the role he played in “Thangam”, a short film which took place in an anthology film that streamed on Netflix. It was directed by Sudha Kongara who is known for making “Soorarai Pottru” and “Irudhi Chuttru”.