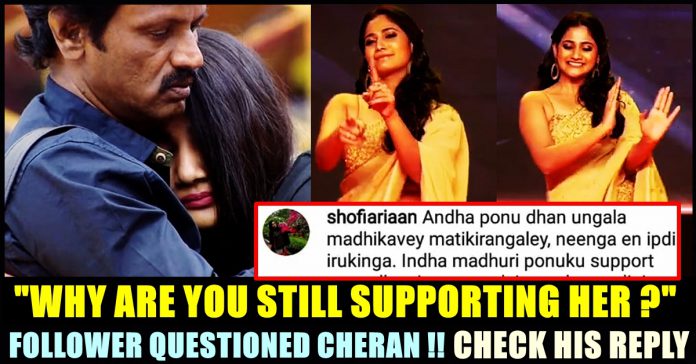 Cheran answered to a follower who questioned on why he is still supporting Losliya, even after getting humiliated by her fans and herself. The national award winning filmmaker said that she could have done things in confusion while participating in the show. He said encouraging others while they are attempting something new is the habit of Tamil people and asked the social media user to forget about her behaviour inside the Bigg Boss house.

Unlike other female contestants of Bigg Boss reality game show, Losliya became pretty much busy by committing projects as female lead in some of the upcoming Kollywood films. Her debut film “Friendship” starring Arjun Sarjah, Harbhajan Singh and Sathish got released in theatres today and veteran Director Cheran who treated Losliya as his daughter during his stint in Bigg Boss season 3, came up with an important message. He wished her the best for “Friendship” film and hoped her to gain a good name by acting in many more films. The national award winning filmmaker said that he believes in her victory just for her family.

Losliya who became an overnight sensation through her Bigg Boss stint, is currently having a number of projects in her kitty. She took part in the third season of the Kamal Haasan hosting show in which Mugen rao grabbed the title. Sandy became the first runner up where as Losliya was pushed to the third place. Since the show, Losliya is actively conducting photo shoots and has been sharing the pictures of herself in her Instagram handle where she is enjoying 16 lakh followers as of now.

Prior Bigg Boss, Losliya was working as a news reader and impressed the viewers of Bigg Boss with her cute expressions and appealing looks. Her relationship with director Cheran had a separate fan base at that time. The budding actress said that Cheran looks exactly like her father and the duo started embracing each other ever since. Now, on the day of the release of her debut film “Friendship”, Cheran came up with a note, conveying his wishes to her.

Replying to her Cheran said “Forget it. It would have happened due to confusion while performing for the show. Now, everything has changed and she lost a lot. We have to encourage when she is trying something new. That’s what the habit of our soil. Please. Who didn’t make mistake ?” in his reply.

During a task in the Bigg Boss house, Losliya confessed that her father’s looks will be very much similar to Director Cheran who also participated in the show as a contestant. “Neighbours around would call my father as Cheran and whenever I see Cheran sir, he reminds me of my father” said Losliya in that episode. The budding actress recently lost her father.