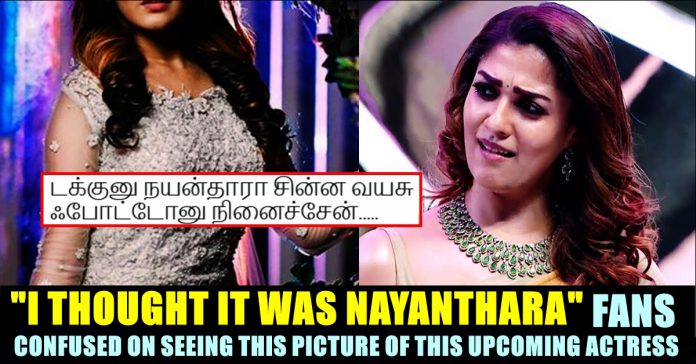 Be it her acting skills or screen presence, Nayanthara is one of a kind in Tamil film industry, comparing to all the other heroines. In a world which is dominated by male protagonists, unlike other heroines, Nayanthara excels in female oriented subjects as well. She who is fondly called as “Lady Superstar” by her fans, proved herself as one of the brilliant actresses in Indian cinema right now by choosing scripts such as Aramm, Kolamavu Kokila, Imaikkaa Nodigal etc. At the age of 35, we could even declare that no actress in Tamil cinema history has paired up with top-tier actors such as Rajinikanth, Vijay like Nayanthara did and it is hard to replace her.

Though it is hard to replace Nayanthara as a performer, her female fans and upcoming actresses tried to resemble her looks and expressions. Now, after seeing the pictures being uploaded by child artist Anikha Surendran in her official Instagram account, internet using Tamil cinema fans are comparing her looks with the “Billa” actress.

Being a 16 year old child artist with very less films to her credits, Anikha is competing with top actresses through the way she is carrying herself in the pictures she is uploading in her Instagram account where she enjoys nearly 10 lakh followers. One of her recent picture of herself, made social media users to question whether it is Anikha or Nayanthara herself.

In the post, the pretty Anikha was seen wearing a walnut colour ball gown dress by holding a hat near her head. Check out the post here :

Not sure whether it is because of the number of times they shared screen space together as mom and daughter or the same Kerala origin they belong, many people in the micro blogging social media site said that they thought it is Nayanthara at first. “I legit thought it was Nayan in the first picture” wrote one of a twitter users whereas another one said “No wonder she is often casted in a Nayanthara film, she looks so much like her”

Check out some of such posts below :

No wonder she is often casted in a Nayanthara film, she looks so much like her pic.twitter.com/0yUlKy9BNb

I legit thought it was Nayan in the first picture https://t.co/MxeFwzeOZD

I thought it was nayan in the first picture wow

Check out some of the recent posts of Anikha below :

Comment your views on Anikha being compared with Nayanthara !!