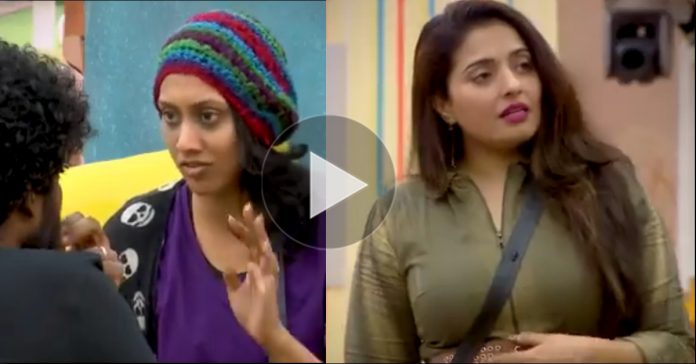 After onions, the Bigg Boss Tamil house contestants are now divided over the missing sandwiches. Mumtaz and the cooking team prepared chilli cheese sandwiches for the housemates – 16 portions – out of which two went missing. Mumtaz is upset because the person who had the sandwiches did not inform her and not only took her portion but Mamathi’s as well. Vaishnavi says it is basic etiquette to check if the food is enough for everyone before eating. Ananth, on the other hand, tells her not to be so rude as she can hurt the person who ate the sandwiches.

This discussion about the missing sandwich continues till Mahat confesses that he and Yaashika each had one extra sandwich. Mahat explains that he thought Mumtaz wouldn’t eat her sandwich as she had an allergy to cheese made from cow’s milk. Once Mumtaz hears that Mahat took the sandwiches, her anger disappears and she says he can take food from her plate anytime. The housemates do not know that there is no elimination this week and the nominees – Nithya and Mumtaz – are ready to leave at a moment’s notice. The day begins with Kamal Haasan asking each housemate to explain the story behind their screen grabs. The funniest of the stories came from Daniel. The screen grab shows him holding neon coloured underwear. When asked why, he candidly said, “I didn’t have a change of underwear for two days and that was my expression when I finally got my clean underwear.” Kamal ends up laughing too and asks if everything is alright now, and Daniel replies, “I have six clean underwear now.”

Everyone gets a nickname from Daniel, after which Yaashika, Aishwarya and Daniel perform their popular ‘baby baby song’ for Kamal. While everyone finds it funny, Ananth doesn’t want Daniel to make fun of his profession. Daniel tried to explain the source of where this joke came from, but Ananth is not ready to listen. He says, “You don’t seem to know your limits.” Daniel then asks Bigg Boss to not mention the ‘bathroom joke’.

The day proceeds on the same note and housemates find out why Janani is called the “Visha bottle” meaning poison bottle. They recall an incident where she played ‘Narad’, man who in Hindu myths creates chaos and so everyone decided that she is the Narad of the house too, but in a fun way.

Similarly, Mumtaz is given the title of owl of the house while Mahat is called the Kumbakarnan of the house. The housemates then surprise Kamal by delivering his dialogues and Kamal too performs the hilarious “Bheem boy Bheem boy” scene from Michael Madhana Kamarajan.

Just when everyone is laughing and having fun, Kamal speaks of the elimination of the week. He reminds the audience that there is no elimination in the first week, but the housemates don’t know this. So Kamal decides to fool them and make a political statement too. He decides to fool everyone by stating that Mumtaz is being eliminated. Mamathi doesn’t accept this and tells Kamal that she thinks he is fooling everyone. None of the housemates want Mumtaz to go, so they are all shocked. Mahat explains that she has fed people in the house even when she has stayed hungry. To this, Kamal says that it was her duty. “It is when people who do their duty feel like they have done a huge sacrifice that corruption in the system begins,” he says. This has housemates believe that the eviction is for real.

Just when she is done saying goodbyes, Kamal reveals that she can stay as there is no eviction in the first week, which makes everyone happy. He tells the housemates to try and understand individuals who are hard to decipher and asks them to introspect before judging others. Now on the first day of the week new promo got surfaced in which RJ Vaishnavi talks to Daniel about Mumtaj’s inability and sickness. She says “she should have stayed home , if she is sick.. she only came here to gain her fame back”. watch the promo here :

What’s your stand on Vaishnavi’s statement ??