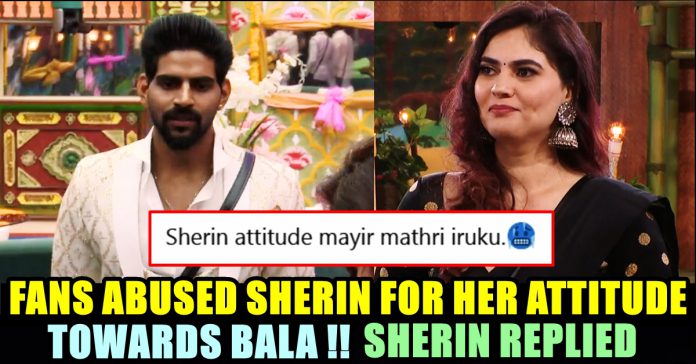 After coming out of Bigg Boss house, Balaji became active in social media platforms and is interacting with his fans through posts and personal messages. He thanked his fans for backing him up when his own friends betrayed him when he was staying inside the Bigg Boss house. Through one of his Instragram stories, Balaji asked his fans not to abuse Sherin and told them that she is a good friend of him. Replying to him, Sherin thanked Balaji and confirmed that what she did inside the Bigg Boss house was just a friendly banter.

Sherin, actress and former Bigg Boss contestant was sent into the Bigg Boss house by Kamal Haasan to evict Rio Raj. She who is also one of the finalists of the third season, became the third runner up of the show. After entering the house, Balaji welcomed her saying “Welcome to our house”. Replying to him, Sherin said that the house belongs to her.

After that, Sherin involved in a friendly banter with Bala and said “Chi pae” to him when he was explaining her about cooking rice in Tamil. On seeing it, a number of fans expressed their disappointment over the actress and few abused her as well. “Yes, #Sherin, you were rude to #BalajiMurugaDoss throughout.. it’s not YOUR house and it is THEIR moment and NOT yours. You were embarrassing yourself with your snotty attitude and comments.” a twitter user said.

Yes, #Sherin, you were rude to #BalajiMurugaDoss throughout.. it's not YOUR house and it is THEIR moment and NOT yours. You were embarrassing yourself with your snotty attitude and comments. #BiggBossTamil4 #KingofBB4Bala

#Sherin why did you have to say that stupid and rude thing to #BalajiMurugaDoss ?

Do you not know it's grand finale and supposed to be a chilled special moment for those 3 people??

He was right in saying you're rude because you were. 🤨🤨#BiggBossTamil4

I hated Sherin’s attitude towards Bala. Who is she to correct his Tamil. Such a worst Human being. She doesn’t know what to talk. She is rude. She got nose cut from her.

Reacting to these comments, Balaji came up with an Instagram story asking his followers not to abuse her and informed them that she is his friend. “Dear Fans, Came to know few people are posting abusive comments on Actress @sherinshringar instagram and Facebook. She is a very good friend of mine. Plz don’t post abusive comments on anyone’s social media. Thank You” Balaji wrote in his story.

Sherin responded to this story of Balaji, Sherin asked him to chill his day. She also said that she feels happy on knowing the fact that the abuses and trolls are filled with love for him. “Some people don’t understand friendly banter and that’s ok !! Love to you” she said through her post.