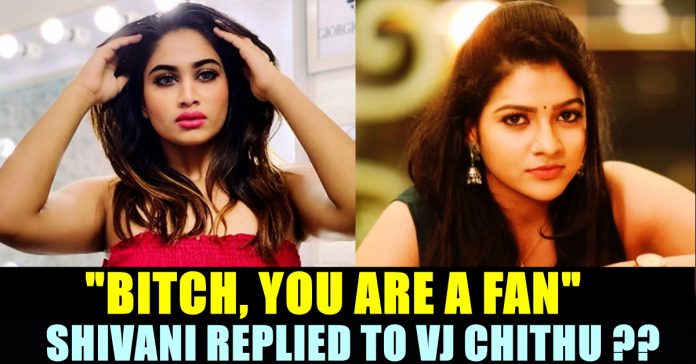 Shivani Narayanan, a popular model and serial actress seemingly replied to a criticism she faced through a couple of her Instagram stories. The young model who is making the youngsters to go gaga over her ultra glamorous pictures, is just 19 years old which made Vijay TV actress Chithra to take an indirect dig at her while replying to one her followers.

It all started when an Instagram user asked Chithra, a former video jockey to post glamorous pictures through his comment to one of her recent posts. In the post, the 25 year old beautiful actress who has been impressing TV audience with her performance as “Mullai” in “Pandiyan Stores” channel, looked elegant in the pictures she posted with her pretty golden colour lehenga. “Good morning, make positive thoughts and enjoy every moment of this day!” she wrote as a caption and wished her 12 lakh followers.

Good morning, make positive thoughts and enjoy every moment of this day!

The now-deleted comment of the fan named as “Insta Lover 687” read “Expecting glamour poses😍” in the post.

Unlike other female celebrities who would have fumed at such followers, Chithu, without losing her nerves, said that he can’t expect such pictures from her profile. Further, she took a sly dig at models who were born after the year 2000. Particularly who has a bio saying that they were born in 2000. “u can’t expect here may be who have bio as born in 2000” Chithu wrote in her comment.

Check out the screenshot of her reply here :

On seeing this comment from Chithu, some of her followers predicted that the “Pandiyan Stores” actress is indirectly mocking Shivani who has been posting extremely glamorous pictures from her photo shoots since the lockdown implementation.

Here’s the screenshot of their comments :

Now, actress Shivani Narayanan who has something similar to what Chithra said in her bio, uploaded a couple of stories which is widely believed to be a reply for the “Pandiyan stores” actress.

In her first story, Shivani, by uploading a picture of herself, reiterated a popular quote which is used to address the haters of an individual. “If you don’t like me and still watch everything I do, Bitch you are a fan” her post read.

Here’s the screenshot of her next story “

Shivani has a separate set of followers for the posts she has been sharing in her official Instagram account. Known for appearing in serials such as Pagal Nilavu, Rettai Roja etc, 19 year old actress has a huge fan base in social media platforms and enjoying nearly 20 lakh followers in Instagram alone. Lately, a rumour surfaced saying Shivani is going to make her silver screen debut with Bigg Boss title winner Mugen. However, the Malaysia based model refuted the news through his instagram story.

Check out the screenshot of Shivani’s bio here :

Comment your views on this rift between the two Tv talents !!