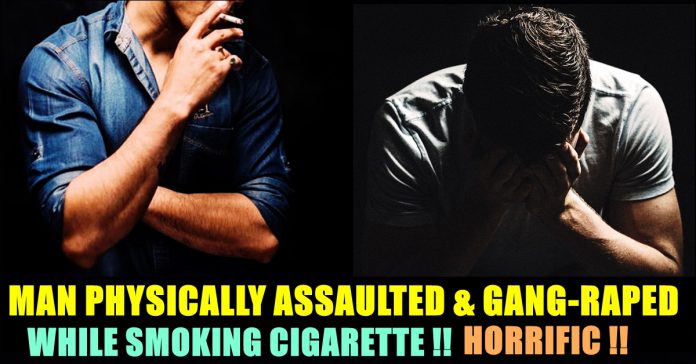 India has been a male-dominant society from ages, and it is hard to believe that male can be a victim in a sexual assault. But this recent incident proved that it is possible if the perpetrator are also men. In India there are a growing number of men who are at the receiving end of harassment and face psychological and physical abuse.

This incident which was happened on Monday evening is about a 36 year old man being sexually assaulted by 5 unidentified persons at Vashi in Navi Mumbai. After the assault, the man who managed to reach a hospital in Koparkhairane, underwent several surgeries to save his life and is currently under observation according to police reports.

“The doctors at a private hospital have had to conduct multiple surgeries. He is under observation,” said the officer. The police report also says that the man was kidnapped when he was stopped for a cigarette which he was on his way to home. 5 men who kidnapped him allegedly beaten him and sexually abused him. “The man was kidnapped from a deserted spot, and was taken behind some trees when he had stopped for a cigarette while going home,” said an officer from Vashi police.

The victim’s relatives reported about the incident to police on Tuesday as a result of which they registered the complaint. “We have registered a case under section 377. Investigation is going on,” a senior officer from Vashi police station said. the victim’s statements were recorded on Wednesday in which he said that those 5 men may have been under the influence of alcohol. He also reported that they are in their late 20’s.

A senior officer from Navi Mumbai police, told TIE “We have taken the description of the accused and are trying to trace them. We are also looking at CCTV footages of the nearby areas. The accused will be arrested soon.”

The police has registered a case under IPC Sections 377 (unnatural offenses) and 34 (acts done by several persons in furtherance of common intention).