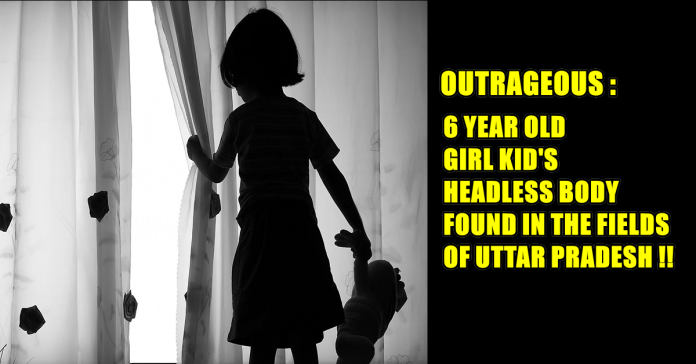 The decapitated body of a six-year-old girl, who went missing last week, was found in a field in Madhotanda area of Pilibhit in Uttar Pradesh on Thursday.

“It seems the body was cut into pieces after the girl’s death. Local residents and relatives of the girl ascertained the identity of the deceased, saying that the body parts were of the same girl,” said Kalanidhi Naithani, SP, Pilibhit. “We have sent the body parts for a post-mortem examination and a team of Madhotanda police is searching for the remaining body parts,” he added.

The girl is said to be a resident of the Kalinagar area, a kilometre away from where the body parts were recovered. The 28-year-old father of the girl who works as a farm labourer said the girl went missing on April 12. “She left home to visit her grandparents who live nearby but never reached there. We tried to find her but couldn’t,” he said. The family members lodged a missing report in the nearby police station on the basis of which police lodged a complaint and initiated investigation. The complaint was lodged on April 14.

While the police alerted nearby areas about the girl, the father ran from pillar to post looking for his daughter. The family even printed pamphlets with the girl’s pictures with an appeal to inform the family if anyone sees her. “My wife went to all temples in the area to pray for her, but it seems nobody heard our prayers. My wife is in shock since she heard about the body,” said the father.

Relatives of the family and residents gathered near the field to help in searching for the body parts. “We have urged locals to provide any information they have about the matter. We will do our best to investigate this matter,” asserted the SP.