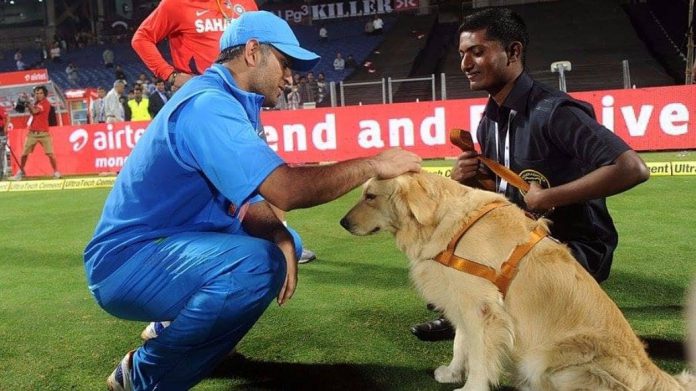 Mahendhra Singh Dhoni is a well known Indian cricketer who is famous for his captaincy. Two world cups, one Champions Trophy and Asia Cup each, Dhoni has all the accolades in his locker a skipper of a team can hope for.

Apart from this Dhoni, there is another Dhoni whom we all should kow about. It is none other than the Sniffer dog Dhoni. However Dhoni will be retiring from duty after his last ODI match between Sri Lanka and India, set in Mohali. Dhoni has been in service for about ten years. And has been a great helper of the Mohali Police department. On 13th december, along with Dhoni, two other dogs, namely, John and Preeti  will also be retiring from the service. A formal farewell will be held by the Mohali police department.

“Dhoni used to assist us in checking at PCA stadium during the international matches. During the world cup semifinal in 2011 between India and Pakistan, when the Prime Ministers of both the countries came to the city, Dhoni was working with us,” Amrik Singh said.

“He likes to sleep six to seven hours a day. He sleeps in the daytime. He is a specialist in sniffing explosives. He is the quickest of the dogs we have when it comes to do any search operations. We are going to miss him. He has been a great asset for us,” he said.

Amrik also added that Dhoni loves eggs and milk. He eats 20 – 30 eggs per day and drinks 3 liters of milk in his 3 meals a day. He also said that Dhoni doesn’t like Chappathis.