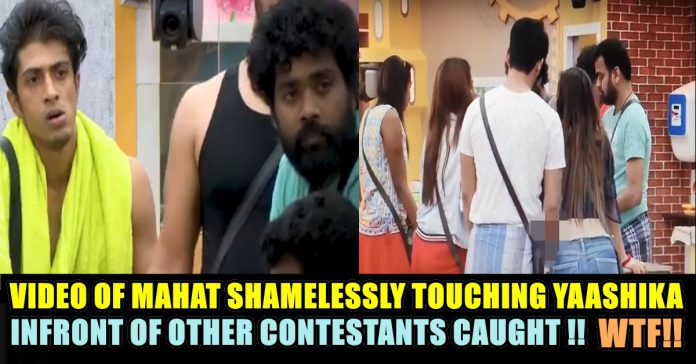 The tenth day in the Bigg Boss house began with the slaves being awakened much ahead of their masters as they had to get breakfast and tea ready for the masters. The masters wake up soon and the task continues. Mumtaz, who was fussy the previous day, had a problem in the morning as well as Bigg Boss had shut down the room where women changed. Other contestants changed in the allotted area but Mumtaz claimed that she was not comfortable. Bigg Boss did not respond to her request to meet or open the room door. So she removed the mic and told Bigg Boss and housemates that she will not wear it until she gets a response. The captain of the house, Nithya, tried to convince Mumtaz to wear the mic and then wait for the room to be unlocked, but she didn’t agree. She wasted two hours in the morning as a result and did not perform any task. Yaashika supported as Mahat’s assistant. Bigg Boss announced next task for the slaves in the house. The women are instructed to sing, dance and make merry to entertain their masters. Senrayan said that he will also join the women and dance and Mahat cracked a joke. Senrayan, however, took this seriously and walked out. Senrayan then explained that it was important that the men took him seriously as otherwise the women might also start taking him lightly. However, even when Senrayan explained it with a serious face, Mahat burst out laughing and Senrayan walked out again and sought some alone time.

The entertaining event began with Ramya and Aishwarya singing, followed by Mumtaz and Nithya’s dance performance. Yaashika and Aishwarya’s sensuous performance has the men in the house floored.

Riythika and Yaashika’s performance, however, has the men roaring with laughter. Mamathi’s off key singing bored everyone, and she dedicated the song to Ananth who has nothing to say. Aishwarya turned out to be house favourite as everyone is impressed with her dancing and singing skills. As the 10th day ended this way , the starting of 11th day was a shocker. Through the promos that released today it is understandable that the male contestants are appointed as slaves for the female contestants as a task. Mahath who is seen showing vulgar gestures while the girls are performing in the previous day has been involved in a cheap activity which was caught on camera. He already caught while trying to touch Yashika’s hip intentionally. He also said “it is tempting” while Balaji asked what he is doing to her. He also laid in between Aishwarya and Yaashika to prank other contestants.

After Switching Off The Lights Mahat Laid In Between Yaashika & Aishwarya !! : Viewers Including Actor Sathish’s Reaction Was Hilarious !! Now in a video he was caught keeping his hands near Yashika’s hip where all the other contestants are standing around the dining table. When Balaji see him touching her he suddenly threw something at Mahat where Mahat stepped back laughing. The other thing which is shocking is Yaashika doesn’t even reacted a bit to what was happening to her. Aishwarya Dutta who is standing near them also seems to be aware of what’s happening around which is evident through her grin. See the video below :

What do you think on this shameless activity in the name of fun. Comment below !!