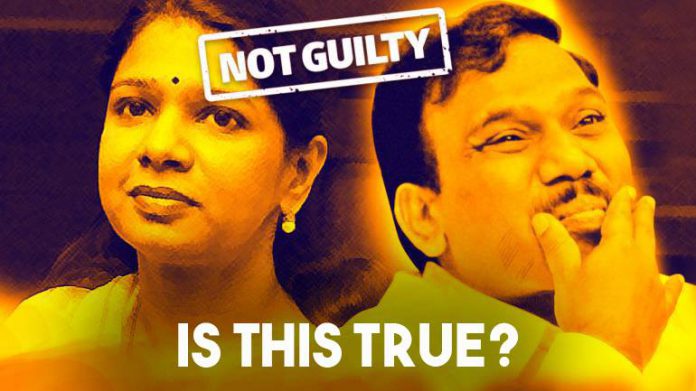 To leave us all in a shock, the special CBI court passed the final judgement  for the 2G spectrum case, and the twist is that A Raja, former telecom minister, Kanimozhi, DMK MP, and 15 other accused were acquitted from he case, as they were not proved guilty.

Special CBI judge O P Saini pronounced the judgment, clearing 19 accused of all charges in the Enforcement Directorate’s money laundering case which comes under the gamut of the 2G scam case.

#JustIn | 2G Court says entire case was hinged upon ‘proceeds of crime’ of Rs 200 cr parked in Kalaignar TV; ‘Proceeds Of Crime’ is the foundational fact for the offence of money laundering pic.twitter.com/caiKb4OfYf

“The Court said that the prosecution has miserably failed to prove any of its charge. Thus all accused are acquitted,” defence counsel Vijay Aggarwal said outside the courtroom soon after the verdict.

The court directed all persons acquitted in the case to furnish a bail bond of Rs 5 lakhs each to ensure their presence in a higher appellate court should the verdict be challenged in the future.

#WATCH: Former Telecom Minister A Raja after being acquitted in the #2GScam pic.twitter.com/hmu8oWOZeD

ALLEGED ACCUSEDS IN THE 2G SCAM WHAT IS 2G SCAM ALL ABOUT?

The 2G spectrum loss is an alleged scam colluded by politicians and government officials under the Indian National Congress (Congress) coalition government. The Union Government of that time is accused that it undercharged mobile telephone companies for frequency allocation licenses, which they used to create 2G spectrum subscriptions for cell phones.

The difference between the money collected and that mandated to be collected was estimated by the Comptroller and Auditor General of India at 1.76 trillion (US$27 billion), based on 2010 3G and BWA spectrum-auction prices.

On 2 February 2012, the Supreme Court of India ruled on a public interest litigation (PIL) related to the 2G spectrum allocation. The court declared the allotment of spectrum “unconstitutional and arbitrary”, cancelling the 122 licenses issued in 2008 under A. Raja (Minister of Communications & IT from 2007 to 2009), the primary official accused. According to the court, Raja “wanted to favor some companies at the cost of the public exchequer” & “virtually gifted away important national asset[s].