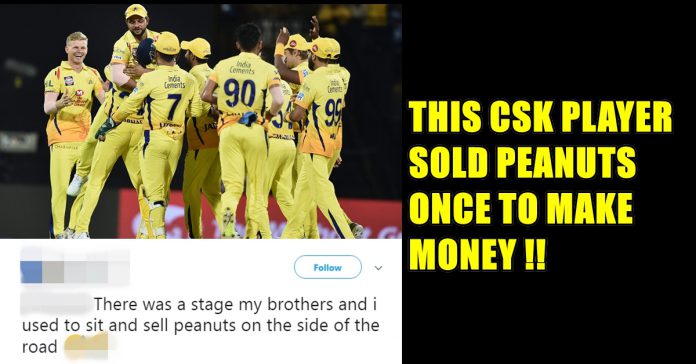 We have often heard stories of sports persons making it big despite ‘poor’ background. And here is a similar tale of yet another player doing well in his life while battling against all the odds. One of the CSK players revealed how he fought adversity as he used to sell peanuts by roadside.

After serving a suspension of two years, CSK returned to the cash-rich tournament in IPL 2018. Ahead of the two-day event in Bengaluru, CSK retained three key players in Dhoni, Suresh Raina and Ravindra Jadeja. While CSK opted for experience over youth at the auctions, they also roped in some fresh names. It is one of those newly arrived player is revealed his past mentioning as fun fact. South African pace sensation Lungi Ngidi, who is part of the Chennai Super Kings squad in the Indian Premier League 2018, took to Twitter and revealed how at one stage of his life he along with his brothers used to sell peanuts by the roadside for a living. Ngidi, who was bought for his base price of Rs 50 lakhs by the two-time champions, took to Twitter to share how he fought adversity while growing up. He tweeted as “Fun fact: There was a stage my brothers and i used to sit and sell peanuts on the side of the road,” Ngidi tweeted from his account.

Fun fact: There was a stage my brothers and i used to sit and sell peanuts on the side of the road 😅😂

Unfortunately, Ngidi did not feature in any of the games for CSK and had to leave for South Africa after his father’s demise. Meanwhile, there is no confirmation whether the pacer will return to CSK camp for rest of the season or not. With Morne Morkel having retired from international cricket, South Africa can look up to Ngidi to take that place in the team. And why not, he has already dished out some memorable spells at international level. He has featured in three Tests as many T20Is and four ODIs for South Africa.

CSK are currently on fourth position in the points table with KXIP, KKR and Sunrisers Hyderabad ahead of them. Dhoni’s men will now take on Rajasthan Royals in their next game on April 20 at Maharashtra Cricket Association Stadium in Pune