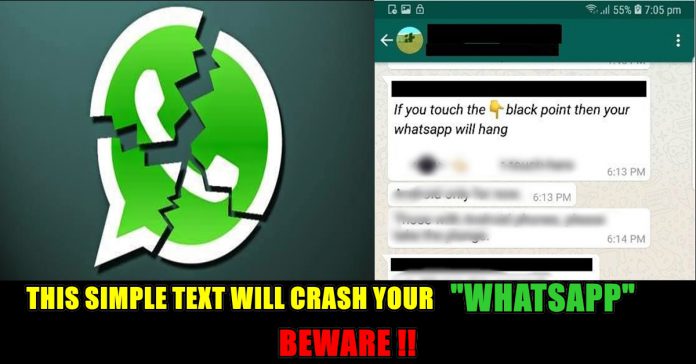 Some users are facing issues with the functioning of their Whatsapp after they deliberately tap on an eerie message, usually forwarded by friends who want a quick laugh. A new forward message is now floating on WhatsApp that is causing the app to jam for a few seconds when the recipient taps on the message box. While there have been several ways of tricking WhatsApp users into some perpetual nuisance just to annoy them, this new bug is enormously being spread and liked by some miscreants. How can tapping on a message “hang” WhatsApp? – you righteously question. Essentially, there is a set of either two messages or perhaps a single message with a line break that contains a line saying “If you touch the black point the your whatsapp will hang” – followed by a second line with some unnecessary space in the start of message and a line that reads – “t-touch-here”. There are also some emojis of a finger pointing downwards in the first line before the word “black” and a black circle next to the emoji of a finger pointing left in the second line. The moment you tap on the message, or the black point just to conform with the directions given in the first line (out of curiosity), your WhatsApp “hangs” for a while where you cannot scroll up and down. While there is nothing malicious behind this bug but has seemingly been composed to vex you. The message that is being forwarded contains some unknown special character that upon being tapped impedes the operations of WhatsApp. The source of this message is not known as of now.

Those who have received this WhatsApp message and eventually fell for it, out of a deliberate action, need not worry as the message seems like a harmless prank that your friends would play. However, it is advised that if you are aware of the repercussions of tapping on the jokey WhatsApp message, you should not deliberately “touch” any part of the message. There are actually a few ways that you can mess with a simple messaging client, and one of them is by including symbols it doesn’t recognize. In this case, it’s not the obvious black spot here causing the problem, but actually the blank space right after it. When you convert the message into HTML you can see just how mischievous this innocuous little message is. That repetition of “‎ &rlm:” are actually something that’s called a control character. In HTML, this denotes the alignment of a piece of text that might be different than that of the text around it.