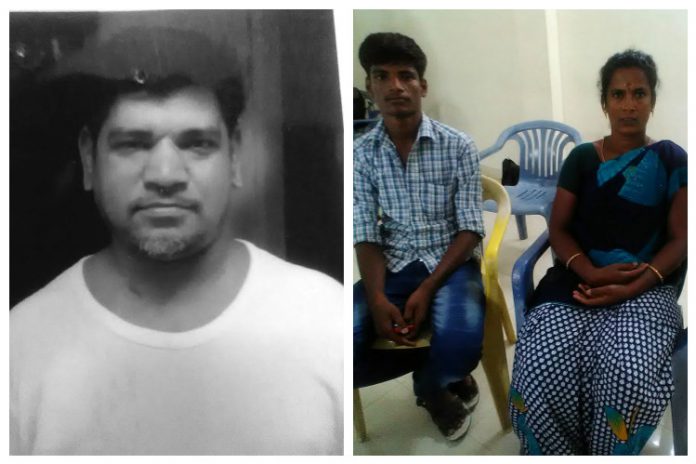 Two men from Tamil Nadu were sentenced to death in Doha, Qatar for allegedly murdering an elderly woman in 2012. The Doha court has given the Indian government time until July 30 to appeal.
Chelladurai Perumal from Virudhunagar district and Alagappa Subramaniam from Pudukottai district were handed the death sentence on May 30. Another man, Sivakumar Arasan from Salem has been given life imprisonment
Forty-four-year-old Chelladurai Perumal had left for Qatar in July 2011 to work as a construction labourer. “We had not spoken to him since he left India. About three months ago, he called us and told us that he was imprisoned for a case. But he kept telling us that he was innocent and will be freed soon,” said Perumal’s wife Rajamma, who works as a daily wage labourer in a matchbox making company.
The three men have been kept in prison for the last four years. On July 15, Suresh Kumar, a lawyer saw a media report on the death sentence and took the initiative to help the Chelladurai’s family. He went to Doha to meet the three men and help them.
Suresh Kumar said that the Doha court has claimed that the three had conspired to murder the elderly woman. “Alagappa is alleged to have murdered the woman and Chelladurai was with him at the time of the crime and Sivakumar was part of planning the murder. Three of them told me that they had not murdered the woman and were unable to prove their innocence without the support of the embassy and a proper lawyer,” said Suresh Kumar.
The Indian embassy in Doha did not even have proper details of the case, says Suresh Kumar. “When I went and asked them about the case details, they did not have much details, not even the copy of the judgement,” he said. He feels that if the Indian embassy had been more helpful, the three could have been in a better condition.
Asked about the three men’s condition in the prison, Suresh said that two men are in deep depression and Shivakumar is being treated for mental illness.
However, in this case, the Indian government has to appeal against the death sentence in the next five days. “Only if the Indian government appeals, the Qatar government will consider the appeal. But the Indian government is waiting for Tamil Nadu government’s response in this case,” said Suresh.
Chelladurai’s family submitted a petition to the collector of the Virudhunagar district on June 6 and also sent a letter to the Chief Minister’s cell on July 17. The family has not got any response from the Tamil Nadu government.
The National Domestic Workers Movement could not find the families of Alagappa and Sivakumar. “I just want my husband back in India. My children keep asking about him every day,” said Rajamma.
The National Domestic Workers Movement wants both the state and Centre government to ensure that the three Tamil migrants get a right to appeal against the judgement.R
source – TNM
S