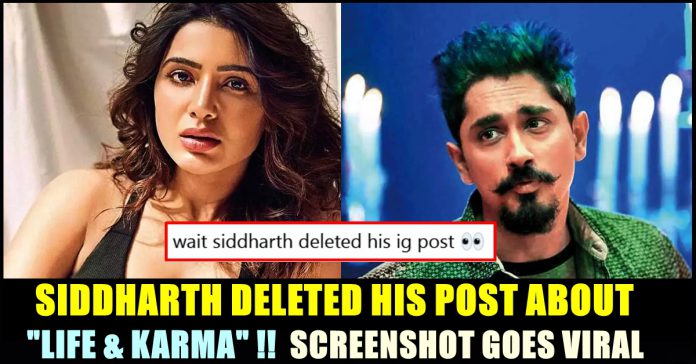 Screen shot of a post which was took down by Siddharth from his official Instagram handle, few minutes after uploading, is going viral in social media platforms with various kind of reactions from fans. Through the post, Siddharth talked about one building his/her tears on another’s cheated tears, another’s truest fears and Life acting like a Karma which is a b*tch. Soon after uploading the post, Siddharth deleted it for unknown reasons. A tweet he recently posted right after Samantha’s divorce announcement, gained him severe criticism from the Internet users. Now, screen shot of the now-deleted tweet is also doing rounds with majority of reactions, criticizing the actor.

On Saturday, Samantha and Naga Chaithanya announced about their separation from marriage life, citing no exact reason. The duo said that they are going to pursue their own paths. “We are fortunate to have a friendship of over a decade that was the very core of our relationship which we believe will always hold a special bond between us. We request our fans, well wishers and the media to support us during this difficult time and give us the privacy we need to move on. Thanking you for your support” both their social media posts read.

Soon after the divorce post of Samantha surfaced in Internet, actor Siddharth who allegedly had a romantic relationship with the actress, prior her marriage, said “One of the first lessons I learnt from a teacher in school… “Cheaters never prosper.” What’s yours?” through his tweet and got criticized by a sum of Twitter users who believed that the actor is spewing hatred at the “Kaththi” actress.

Now, the actor came up with another post in his Instagram space, writing “Never build your smile on another’s cheated tears, Never dream what’s yours over another’s truest fears. Life, like a Karma, is a . . . – Sula ( philosopher puppy)” as his caption by uploading a picture of a dog. Check out the screen shot of his post below :