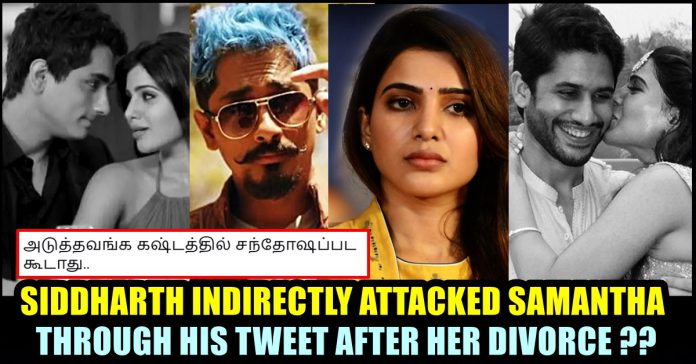 Actor Siddharth’s tweet which surfaced right after Samantha and Chay announced about their divorce going viral among the users of social media platforms. With many criticizing the 42 year old actor saying that he is indirectly taking dig at Samantha with whom he allegedly had a relationship prior, a number twitter users are supporting the actor as well. Reports says that Samantha and Siddharth were in relationship for two and half years. They both acted in a film named “Jabardasth” which got released in the year 2013.

While we were thinking that it is mere media speculations, Telugu actor Naga Chaithanya and South Indian actress Samantha came up with a press note in their respective social media accounts, announcing about their divorce. For past few weeks, reports on the duo parting ways are surfacing in Internet. However, there was no word from either of the prominent actors. Now, to our shock, the duo came up with posts confirming about themselves parting ways.

“To all our well wishers. After much deliberation and thought Chay and I have decided to part ways as husband and wife to pursue our own paths. We are fortunate to have a friendship of over a decade that was the very core of our relationship which we believe will always hold a special bond between us. We request our fans, well wishers and the media to support us during this difficult time and give us the privacy we need to move on. Thanking you for your support” read the post of Samantha whereas Naga Chaithanya uploaded the same by changing the name Chay as Samantha.

Many celebrities and fans have been reacting to the news in various ways. Meanwhile, actor Siddharth who allegedly had a relationship with the actress during a phase, came up with a tweet writing, “One of the first lessons I learnt from a teacher in school… “Cheaters never prosper.” What’s yours?” in his tweet. Check out his tweet below :

Check out some of the reactions for the recent tweet of Siddharth below :

One of the first lessons I learnt from my dad after my break-up when I was in college.

"Let it go. Don't see her as an enemy. Everything happens for a good reason"

Honestly this was not at all required at this moment. You could have just refrained yourself from squeezing into a matter that's irrelevant to you. Not done. Very shallow of you..

One thing – he didn't take the names. Second thing – people sometimes need an outlet like this to get over the pain. Every side has a story.

My teacher : Go to school for knowledge not for quotes.