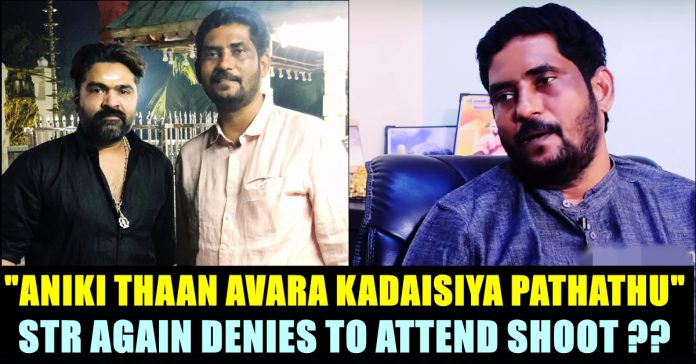 Not many days ago, a tweet from producer Suresh Kamatchi said that “Maanadu” is going to go on floors. The film which was earlier announced as that it was officially dropped due to Simbu’s non-cooperation, raised eyebrows of the fans on the recent announcement.

“விரைவில் str in மாநாடு படபிடிப்பு தேதி அறிவிக்கப்படும்.” read the tweet of Suresh Kamatchi which was posted on November 5. The tweet also contained pictures of Simbu worshipping in a temple along with the producer. Check out the post below :

Now in a recent interview with Galatta youtube channel, Suresh Kamatchi has revealed that he couldn’t contact Simbu since that day. “I am still trying to make the words I said once true. Till this minute, I am struggling to accomplish the mission I got committed in. I couldn’t honestly say that I achieved what I aimed. I am stilling believing and struggling to achieve it” hinted Suresh Kamatchi about the absence of Simbu for “Manadu” shoot.

“I can still assure that I could able to fund the film till it gets released. You have to ask further details to Simbu. I got tired of answering in interviews about “Maandu”. You have to contact Simbu to get his version” said Suresh Kamatchi to the interviewer.

Further he added that he couldn’t contact Simbu since the day he went to Sabarimala temple. “It all depends on Simbu’s co-operation. The truth is couldn’t able to communicate with his since that days. I have seen many memes made with the pictures that got released on that day. For a better clarity, I suggest media to conduct an interview with Simbu” said Suresh Kamatchi in this interaction.

Simbu who was last seen in “Vantha Raajava Thaan Varuven” by Sundar C as protagonist, has attended shoot of the 50th movie of Hansika, his former girlfriend. There were shooting spot pictures of Simbu with gautham Karthik were also released which is a movie produced by Gnanavel Raja. It was said to be a remake of Kannada remake “Mufti”. However, it was also dropped by the makers of it due to Simbu’s absence.

Days after the news of Maanadu’s drop announced, Simbu announced through his manager that he is going to make his own movie “Maghamaanadu” under his banner. After that the actor went “Thailand” according to the report of Indiaglitz.

At the time of Manadu’s drop, the facebook post of Suresh Kamatchi said that due to unreasonable delay, the film is getting dropped. “I couldn’t avoid dropping the movie as it getting delayed for a long time. My love and friendship with Simbu will continue. Thanks to his fans and media friends for supporting me all these days.” said the statement of Suresh Kamatchi.

What do you think on these statements of Suresh Kamatchi ?? Comment your views !!