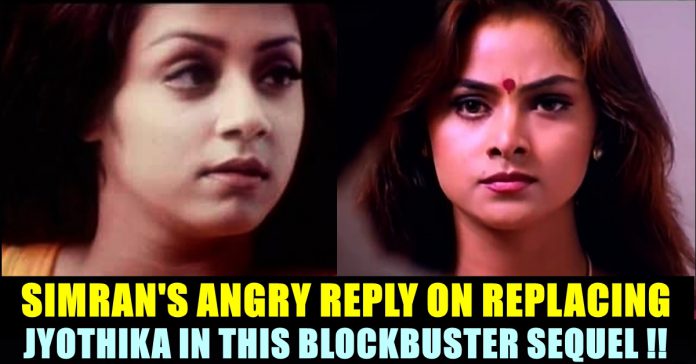 A strong buzz on Simran replacing Jyothika in the sequel of mega blockbuster Chandramukhi doing rounds in the social media platforms. The actress, now cleared the air by making a statement through her official twitter account.

Multitalented Raghava Lawrence who is known for his Muni series, is also known as an ardent fan of Super star Rajinikanth. The dance master recently came up with an announcement of his lifetime. Raghava Lawrence who is currently busy in directing Bollywood Superstar Akshay Kumar in Kanchana remake, in his recent press release, has said that his next film is going to be the sequel of blockbuster horror thriller Chandramukhi.

The sequel is going to be directed by P. Vasu himself, said the statement of Raghava Lawrence. The actor has happily informed to the fans that he is going to do the role of a protagonist in the film with the permission of Superstar Rajinikanth. “Chandramukhi” is the only film to have a theatrical run of 1000 days. The film also acted as a comeback of Superstar Rajinikanth’s career after Baba’s flop.

Recently, a movie tracker named as Riaz K Ahmed came up with a speculation saying that actress Simran who recently paired up with Rajinikanth in “Petta”, is going to replace Jyothika in the sequel. The role played by Jyothika in the first part is the USP of the film. She got highly praised by the critics and by the audience for her performance. Check out the post uploaded by Riaz K Ahmed :

The stunning @SimranbaggaOffc to replace #Jyotika in #Chandramukhi2 ?

Check out the latest cinema update from @V4umedia_ 😊👌👍

Replying to this tweet. Simran who is active in the micro blogging social media site, came up with a reply saying that the news is completely fake. “It is a fake news I am sorry to disappoint my fans wanted to clarify I have not been approached for any such role for a movie. I kindly request you all to plz get it right before publishing it on any platform. Thank you.”

It is a fake news I am sorry to disappoint my fans wanted to clarify I have not been approached for any such role for a movie. I kindly request you all to plz get it right before publishing it on any platform.
Thank you. https://t.co/0xADfO3wwG

Simran who was last seen in “Petta” did a dance performance in “Master” audio launch and got highly praised by actor Vijay. She is expected to appear in Dhruva nakshathram and Vanangamudi. Comment your views on this reply from the actress !!