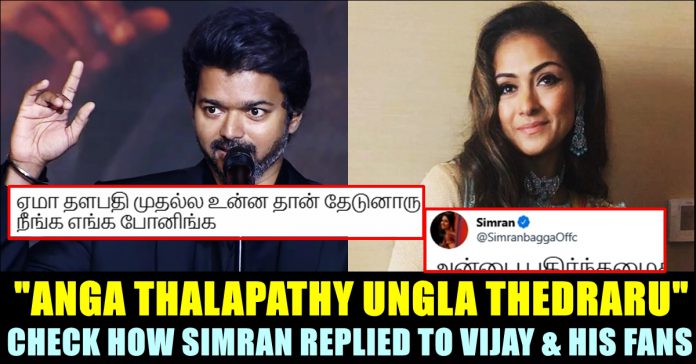 Evergreen gorgeous actress Simran who paired with actor Vijay in several blockbusters made a special dance performance on “Master Audio Launch”. She performed for the songs of actor Vijay to make his fans happy. On seeing her performance, actor Vijay thanked her as soon as he went on stage to give his speech. He searched Simran for a while and thanked her after knowing that she left the event.

Fans of actor Vijay who saw the show in Television started informing Simran in Twitter that their favourite star searched for her before giving his speech. They did it by commenting on a post uploaded by Simran in the micro blogging social media platform. “First of all, Simran Ji, where are you ? Are you here in the event ? You are not here ? Ok Alright. You danced for us in this show. I was really touched. You don’t have the necessity to perform for us. Thank you so much” said Vijay before starting his speech in Master audio launch.

As soon as seeing Vijay mentioning Simran, fans of him informed it to Simran by commenting in a post uploaded by Simran in her Twitter. Check out some of their reactions below :

Vijay was searching for you but ur on twitter 😂

Vijay was looking for you when he started his speech.

In a way of replying to all the fans and expressing her love towards Vijay, Simran shared the particular video clip of Vijay mentioning her and thanked him. “Thanks for sharing the love my friend. Vijay means success. Vijay means Master. I wish Master to become a huge success” she wrote in her tweet. The most surprising fact about the tweet is, the Mumbai born actress wrote her tweet in Tamil language.

Simran shared screen space with Vijay in three blockbuster films which are Once more, Thullatha Manamum Thullum and Priyamanavale. She made a special appearance for a song in Youth which was also a blockbuster. The successful was seen under same roof after several years and fasn couldn’t keep calm after seeing them pouring love towards each other.