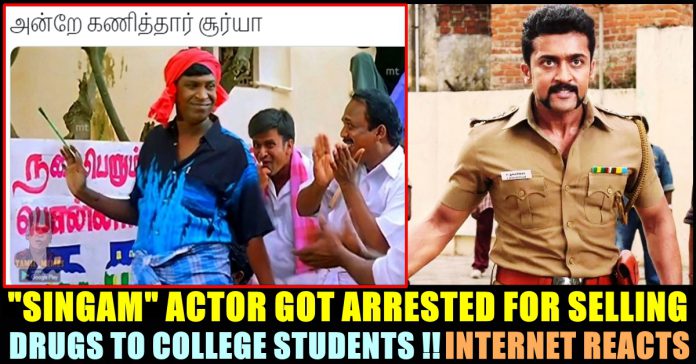 On Wednesday, Bengaluru Police arrested a Nigerian actor named Chekwume Malwin for peddling drugs. The actor who had acted in several South Indian films, is being identified as “Singam” actor as made his presence in the Suriya starrer as one of the Africans who involve in illegal activities. The Police had arrested him at the city’s HBR layout after receiving a tip off.

As soon as the actor got arrested, users of the online platforms started wondering how director Hari managed to give him a role of his real life character in his movie “Singam-2”. In the film, Malwin could be seen standing behind the main antagonist “Danny” and the screen grab of his scene is doing rounds in social media platforms.

The Police officials, reportedly seized 15 grams of MMDA which is commonly called as ecstasy or molly, 250 ml of hashish oil, mobile phones, Rs. 2500 cash and drugs worth Rs. 8 lakh from the accused who has credits of working in more than 20 South Indian films. The film Chekwume Malwin acted inclides, Singam, Vishwaroopam, Dilwale, Anna Bond, Paramathma, Jambo Safari etc. He has been booked under sections of the Narcotics Drugs and Psychotropic Substances Act 1985. According to a statement made by DCP Sharanappa, he has been accused of targeting college students and business men.

Reports suggests that Malwin is in India with a medical visa and had undergone a 2 month training at the New York Film Academy that is located in Mumbai. “Hari sir – The most real director ever” said movie reviewer Prashanth in his tweet in a lighter note whereas many other netizens reacted in a similar way. Trolls on “Ande Kanithar Suriya” ( Suriya predicted it way before) are trending in the micro blogging social media site as well. Malwin appeared in Singam 2 as one of the gang members of the main antagonist.

Check out some of the reactions surfaced in Internet below :

Hari sir – The most real director ever 😁. https://t.co/QTrfQgQADE

After hearing the news